So here we are, my 50th post about Superman: The Movie, and today I’ve decided that I’m going to mark this mini-milestone by talking about something else.

Because this isn’t specifically a Superman blog; it’s a history of blockbuster superhero movies — and so far, I haven’t really explored what a “blockbuster” is, and how it works. So today, I want to go back to the beginning of that story, starting with a 1913 silent film from Italy about the persecution of Christians in ancient Rome. No, wait, come back, it’s interesting.

The movie was called Quo Vadis? — or Where Are You Going? to you and me — and it was the first large-scale movie specifically designed to amaze people. It was made in Italy by director Enrico Guazzoni, based on an 1896 novel by Henryk Sienkiewicz, and it was bigger than anything the public had seen before.

For one thing, it was longer. At that time, theater programs were usually made up of short segments, and they’d just developed the concept of a “feature film”. One of the earliest American features was Cleopatra in 1912, which ran to 88 minutes. That was nothing compared to Quo Vadis, which was almost two hours long, with two intermissions in the middle. 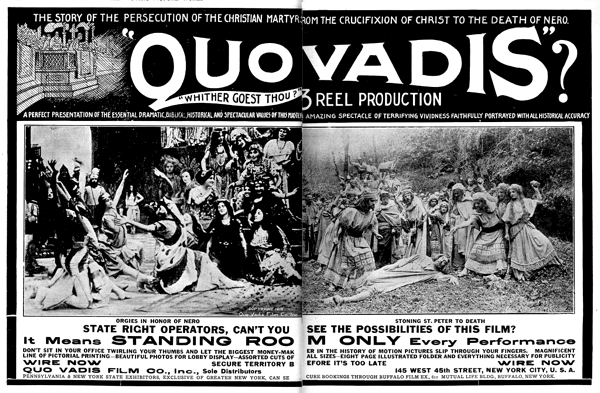 The story of Quo Vadis is simplicity itself. It’s basically a typical boy-meets-girl story, where the boy is a military officer serving Emperor Nero, and the girl is a barbarian hostage that he meets at a friend’s house and wants to kidnap.

Marcus knows that Lygia is a Christian, so he sends his slaves to the Christian community to kidnap her. Ursus beats up Marcus’ slaves and sends them packing, so Marcus goes undercover to a Christian meeting himself, where he hears the Apostle Paul. Then Ursus finds Marcus and beats the hell out of him again. It’s kind of Ursus’ movie; a lot of the plot points are just Ursus charging in at crucial moments and hitting dudes.

Lygia nurses Marcus back to health and falls in love with him, but the Apostle Paul says she can’t marry a non-Christian. It’s already tough when your girlfriend’s family doesn’t like you; imagine an actual Apostle telling her to cut you loose.

Meanwhile, Emperor Nero is writing a poem about the burning of Troy, and says that he wished he could see a city on fire; shortly afterwards, somebody sets Rome on fire, how’d that happen. Marcus helps Lygia and the Apostle Peter escape from the fire, and Peter baptizes Marcus on the spot and makes him a Christian.

Nero decides to blame the Christians for the Fire of Rome, so they all get herded out of their homes and into the arena, to be eaten by lions. A bunch of Christians get eaten. For some reason, Lygia is tied to the back of a bull, and then Ursus has to beat the bull to death with his fists. You see what I mean about Ursus? He’s like the Vin Diesel of ancient Rome.

With the audience at the arena on Lygia’s side, Nero has to release her, and she and Marcus get married. Then there’s a coda about Nero being betrayed by his legions, fleeing Rome, and dying.

“Thus died Nero,” the caption says. “Like fire, he brought nothing by destruction, mourning, pain and death. But from the rain of strife and blood sprang a new life: the life of Christianity, in the sign of love and peace.” And then everybody worships Jesus for a minute, and that’s the end of the movie.

So you can see how that would be interesting for people, especially if television hasn’t been invented and this is the first time you’ve ever seen something on this scale projected on a screen.

The movie is posted on YouTube, and it’s worth looking at. It’s not a great print, but you can see how big and elaborate everything is, especially in the spectacle scenes.

The depth of the sets was an attraction all by itself. In 1913, people were used to movies that looked like stage plays, and the Quo Vadis sets were tall and deep, with characters entering through a doorway at the far end of the set and proceeding to the front, often accompanied by a couple hundred close friends.

The New York Dramatic Mirror said, “The scenes have depth, and the massive furnishings appear so genuine that the spectator feels as if he might walk down the orchestra aisle and enter Nero’s banquet hall.” It was basically an IMAX movie for people who were very much not used to the concept of immersive movie experiences.

There are three big spectacle scenes that break up the movie, and one of the things that makes them special is that they involve a lot of editing and changes of perspective. Most of the regular scenes in the film are filmed from a single camera position, but in the spectacle scenes, there’s too much stuff going on to fit into just one shot.

The second spectacle is the burning of Rome, which involves more than twenty-five shots with hundreds of extras, and a lot of smoke. They used miniatures to represent some of the burning buildings, which is very effective, and insert shots of Nero playing his lyre and thoroughly enjoying himself.

The climax of the film is the arena sequence, which goes on for ten minutes and includes a chariot race, gladiators fighting with tridents and swords, and a whole crowd of Christians being attacked by a pack of more than a dozen actual lions. You don’t see the lions killing the Christians, of course, but there’s some nice shots of the Christians huddling together, the lions being released, several shots of Nero and the stadium crowd, and then the lions ripping into some meat. It’s great. 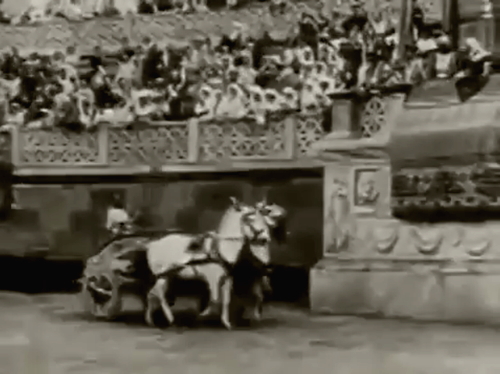 So you can imagine the effect that this had on people, who had literally never seen moving pictures do anything like this. People went nuts for it.

The movie premiered in the US in March 1913 at the Astor Theatre in New York City, where admission prices ranged from 25 cents to $1.50 — and Variety said that it earned an average of $5,000 a week in the first four weeks. It played at the Astor for nine months, all the way until December.

Nationally, there was a Quo Vadis craze, with the novel becoming a best-seller. Theatrical companies produced Quo Vadis plays, and speakers toured the country, giving lectures about the story. If there was such a thing as action figures in 1913, they would have sold a shit ton of action figures.

They didn’t call it a blockbuster, because that word derives from World War II, which they hadn’t had yet. But you can draw a clear line from Quo Vadis through The Birth of a Nation and Gone With the Wind to Jaws, Star Wars and Superman, and everything that came after. If you want a nine-month run and that sweet $5,000 a week box office, then your film has to be bigger than anybody expects.

In our journey through Superman, we’re just on the cusp of the helicopter scene, the movie’s first big action sequence that finally gets Superman out of the newsroom, and up in the air. The film’s spent more than an hour writing checks, and it’s time to start cashing them. I wonder if there are any lions left over that we could use.

Join 127 other followers
My Tweets