You think you’re having a hard day? Try being a tinfoil cop in a Superman movie.

I mean, there’s no glory in this. Everybody else on Krypton looks like a gorgeous space angel on graduation day, decked out in starstuff. Not you, though. You look like an asshole. 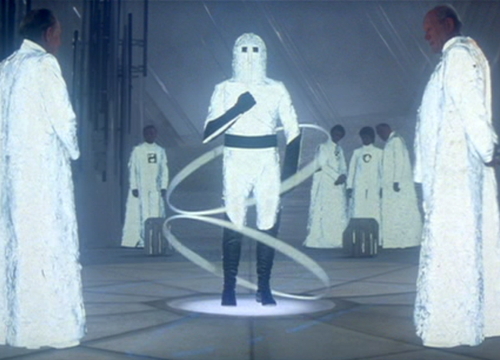 This, if you’re not familiar, is Officer Jiffy Pop the Science Cop, Krypton’s thin tin line and the only thing that stands between us and an actual scene from Superman: The Movie. Don’t get too attached, cause he’s not going to be with us for very long. In fact, if you only watch the theatrical cut, as God intended, then you won’t see him at all.

In the 2000 Director’s Cut, the gentleman shows up right after the Jor-El/Lara scene discussed in the last post, which ended with Jor-El saying, “He will not be alone. He will never be alone.” Then there’s a cut to the science council, who are once again standing around and fretting. Jor-El gave them a pinky-promise that he and his wife wouldn’t leave the planet, but apparently they’re not not-leaving the planet enough, because the council still has that empty, thwarted feeling.

“The energy input to Jor-El’s quarters is now in excess,” says the vision in silver. “Our data indicates the loss is due to a misuse of energy.” These people are moments away from falling into a crevasse, and melting in the hot magma of a planet they all thought was just shifting its orbit a little bit to the left. 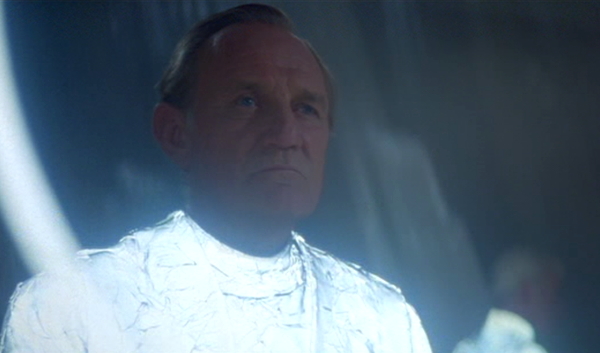 “Investigate!” says Elder #1, who simply hates it when energy is misused.

“And if the investigation proves… correct?” asks Elder #2.

Elder #1 sighs. “He knew the penalty he faced, even as a member of this council.” 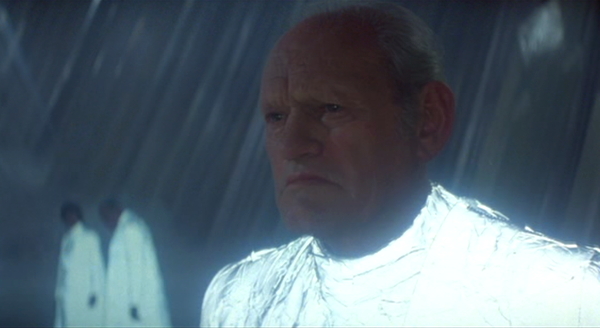 “The law will be upheld!” Elder #1 declares, and the investigator vanishes with a little swooshing noise, leaving the hula hoops to revolve on their own. And he’s never seen again, unless you’re watching one of the TV cuts, in which case he is. 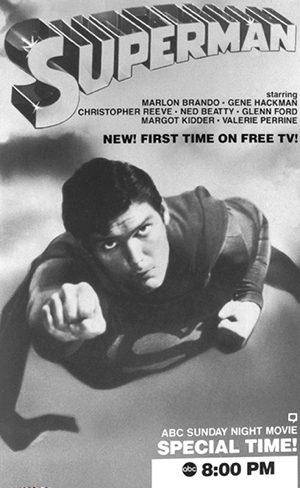 So today it is my task to introduce to you the many different versions of Superman: The Movie, which are difficult to keep track of, because some of them have multiple names and they all sound alike.

Theatrical version (1978): The film that was released to movie theaters, otherwise known as the actual movie. 143 minutes.

ABC-TV version (1982): The film as it first aired on ABC-TV in February 1982 as a two-night event, including lots of deleted scenes and extra footage. 182 minutes.

KCOP version (1994): Another TV version of the film, which is six minutes longer than ABC’s, including two complete scenes that had never been seen before. It’s known as “KCOP” because that’s the LA station that first aired it. 188 minutes.

Director’s Cut, also known as the Expanded Edition and the Special Edition (2000): Another cut of the film which Richard Donner had some input into, which they thought might get a theatrical release. That didn’t happen, but it was released on DVD. 151 minutes.

I’d probably have a decent chance of keeping this all in my head at the same time, if it wasn’t for the “Expanded” version and the “Extended” version, which I get mixed up beyond all remedy. Also, it turns out there are several other TV cuts of varying lengths, and I’m not sure the director was that involved in the Director’s Cut. 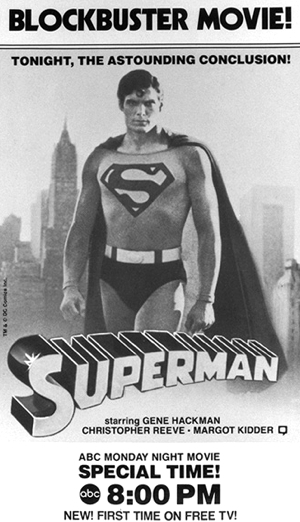 Naturally, at this point you’re asking, why are the other cuts so much longer than the theatrical version?

This is why: Superman had been a huge box-office hit in 1978/79, and then played to limited audiences on HBO. There wasn’t such a thing as “home video” back then, so if you wanted to see Superman again, which everyone did, then you had to wait for a TV network to show it. So the first network to air the film was guaranteed a huge audience, and the Salkinds, who held the TV rights, knew that the networks would pay a premium price for it.

ABC wanted the film, but the 143-minute running time was inconvenient. Adding commercials would bring that to 180 minutes, which would air from 8pm to 11pm, and that was a problem. So I need to take a moment — and you can not imagine how elderly this makes me feel — and explain to younger readers what “prime-time” used to mean. Gather round, children, and I will tell you a tale.

Back in the old days, when people wanted to watch a television program, they had to sit in front of the TV at a specific time, and if you didn’t, then you couldn’t. There was no way to control what happened on your own TV set. You couldn’t put a show on your watchlist and catch up a couple days later — in fact, you couldn’t even pause it when you wanted to go to the bathroom. It was like having a wild animal in the house that did whatever it wanted.

Obviously, Superman was going to be a huge hit with the whole family, so it needed to air in the 8-10pm slot, before the kids went to bed. They could fit Superman into two hours if they cut a lot out, but that wouldn’t make anyone happy. Really, the only way to do it was to expand the movie to 4 hours of network TV, and show it over two nights as a special event.

The Salkinds said sure, no problem. Donner had shot a lot more footage than he actually used; that’s why they’d fired him in the middle of the second movie. So there were lots of longer takes, and alternate takes, and several sequences that were cut entirely. If they threw all of that together, then they could bump up the running time to 182 minutes, plus 58 minutes of commercials to fill the four-hour time slot. Then they dredged up another six minutes in 1994, mostly to sell to overseas markets, which brought the film to a bloated 188 minutes.

So what’s in those extra 45 minutes? Well, there are a few things that I think are worthwhile, including a couple lines in the science council scene that actually mention the Phantom Zone by name.

For example, when Elder #1 threatens Jor-El, he specifies, “You would be banished to endless imprisonment in the Phantom Zone. The eternal void, which you yourself discovered.”

I can see why that line was cut — the Phantom Zone doesn’t really become germane until the second movie, and the second sentence is terribly clunky. But I can see potential value there.

But then there’s the Krypton Kop, who is terrible. In the actual movie, there are two scenes of Jor-El, Lara and the baby, and they’re separated by a dramatic establishing shot of Krypton. In the TV version, between those two scenes, there’s the scene described above, with the Elders telling this investigator to go and investigate.

Again, the reason why they cut this is obvious: it doesn’t accomplish anything, and it distracts from the family drama. Theoretically, it’s there to add some more urgency to the situation — Jor-El needs to get that spaceship up into the sky before the lawman shows up at the lab.

But you can’t really add any more dramatic urgency, when the whole planet is moments away from exploding. That ticking clock is already about as emphatic as you can get.

There’s even more of the security guard in the Extended TV cut — an extra six and a half seconds of his helmet as he travels to Jor-El’s place, and then, once the planet starts coming apart, this ludicrous two-second shot of the guard’s eyes as he meets his unmourned end.

Once the planet starts to crumble, there’s also an extra minute of Kryptonians running and crouching and falling and dying, which the film already had plenty of.

Then there’s a whole bunch of things that nobody asked for, like an extra minute of Lana and her friends driving around Kansas, and an extra four minutes of Clark wandering around the Arctic. 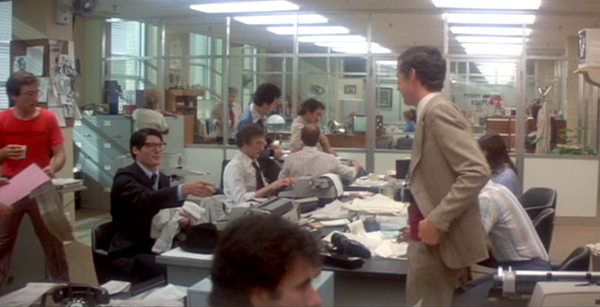 There’s also an agonizingly long shot of Clark sitting down at his desk for the first time, where he introduces himself to a random reporter and says hi to Jimmy, and then it keeps on pulling back and nothing happens, and it goes on for hours.

On the whole, the extra footage just slows things down, rather than adding anything of value. And then they added 58 minutes of commercials over the two nights, so the whole thing was a pretty raw trick to play on the children of America. I guess some people just live in a house with no mirrors, so they don’t have to look at themselves in the morning. 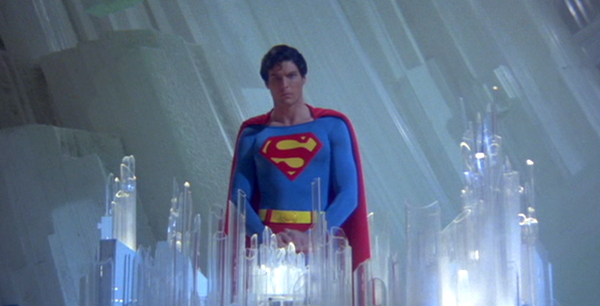 There are a few actual scenes in the other cuts, which I’ll address as we get to them. For now, I’ll just mention the scene where Superman apologizes to his dad for having too much fun. It comes right after the long sequence of Superman catching criminals and rescuing cats and presidents, which is one of the most pleasurable parts of the movie, and gives you a two-minute lecture on why you shouldn’t have enjoyed it. It’s the only time that we see Marlon Brando and Christopher Reeve interacting with each other, which unfortunately does not make up for the fact that it makes Superman look stupid and stops the film dead in its tracks. 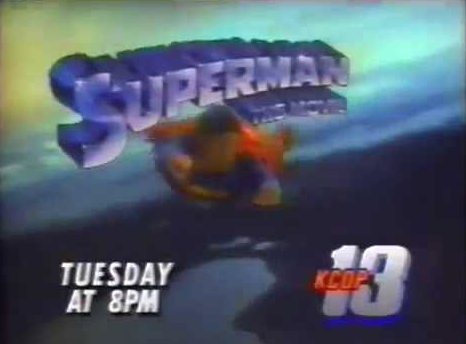 Over the next couple decades, different versions of the film aired on TV, and once people had VCRs, fans started to trade increasingly blurry tapes of the extra material. The official VHS and DVD releases just had the original theatrical version, but there was clearly some appetite for a longer cut. 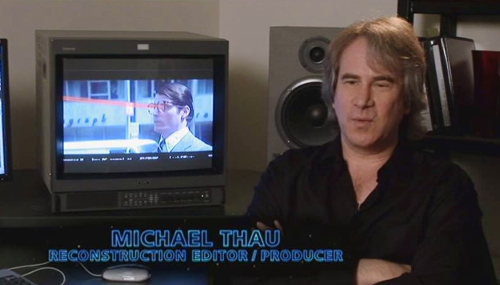 In 2000, editor Michael Thau worked with Donner to create the Director’s Cut, which is eight minutes longer than the theatrical film and not really very much better.

Thau actually wanted to cut some material from the original film — Lois’ poem from the flying sequence, and a couple minutes of the car chase scene — but Donner said no, so those scenes stayed. The new cut does include the Krypton cop scene and the apologizing-to-Dad scene, which in my opinion do not improve the experience.

The Blu-ray box says that the Director’s Cut is “Richard Donner’s definitive vision of his film,” but if that’s the case, then it’s unclear why he didn’t release that in the first place. As far as I know, there aren’t any stories about Warner Bros or the Salkinds forcing him to cut scenes that he wanted to include. The Salkinds were lifetime subscribers to the bigger-is-better club, and they’re the ones that added all the footage they could find, just four years later.

In fact, I would suggest that the motivation to add some more footage for the 2001 DVD release may have been that the fans were more likely to buy new box sets if they incorporated at least some of the material from the TV versions. Then in 2017, for the Blu-ray release, Warner Bros just went ahead and put out the entire 188-minute “Extended Cut” TV version, along with the 151-minute “Expanded Edition” Director’s Cut.

“The original cut that was released in theatres was my cut, and anything else I had nothing to do with. That long television version had nothing to do with what I thought was the proper version. If there are other versions floating around, I have no idea where they came from. At certain points in your life, you lose control of a film. I thought it was foolish — everything that I had taken out of the film, they put back in. It was stupid. But anything for money.”

In the end, this is another iteration of the endless struggle between Art and Commerce, which is still going on, four decades after the movie’s release. Luckily, this is the only superhero movie that ever had problems like this, so everything from here on is going to be smooth sailing. Somebody break open Jiffy Pop’s helmet, and let’s have some popcorn. 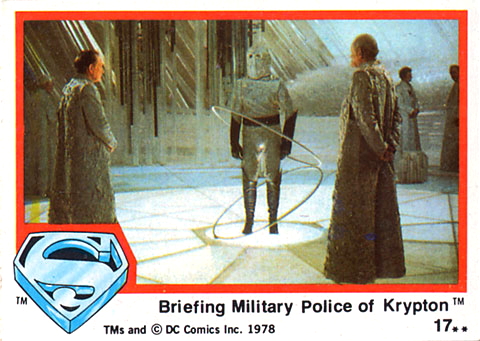