All right, here’s the situation: we are currently three weeks in on this new format that I’ve invented for myself, where I try to comment on every element of Superman: The Movie that I can think of, and today is one of those “face the music” posts, both literally and figuratively. At some point, I have to write about John Williams’ orchestral score, because it’s an important part of the movie and people who like movie scores are entirely obsessed with it, but I don’t know much about music and I am utterly hopeless on the subject.

I mean, I have this booklet that came with the Superman: The Music box set, and here’s what it says about the score during the “space capsule flying across the galaxy” sequence:

“Scherzo for the starship’s three-year journey. A swirling woodwind line suggests the speed at which the spacecraft is traveling while high-register violins sing a lofty melody exclusive to this cue; statements of the Fanfare are overlaid skillfully.” 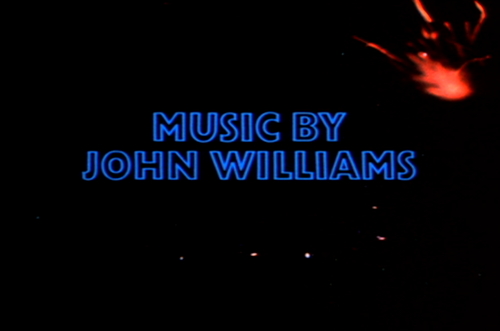 But what the hell, let’s give it a shot. I’ve got the booklet and there’s a music-only audio track on the Special Edition DVD, and I ought to be able to make something out of this.

The music in Superman: The Movie is by John Williams, who had recently scored, both literally and figuratively, with a little movie called Star Wars, released the previous year. By this point, Williams was getting multiple Academy Awards nominations per year. He was nominated for Valley of the Dolls in 1967 and Goodbye, Mr. Chips in 1969, and won for Fiddler on the Roof in 1971. In the early ’70s, he scored the three big disaster movies: The Poseidon Adventure, Earthquake and The Towering Inferno.

Among the five big mid-70s blockbusters — Jaws, King Kong, Star Wars, Close Encounters of the Third Kind and Superman — Williams wrote the score for four of them, and the one that he skipped, King Kong, wasn’t very good, so there. I don’t know what anybody else was doing in the 1970s, but John Williams basically owned the big movies.

For Superman, Williams held the line at nine motifs, and so far in the movie we’ve heard five of them: 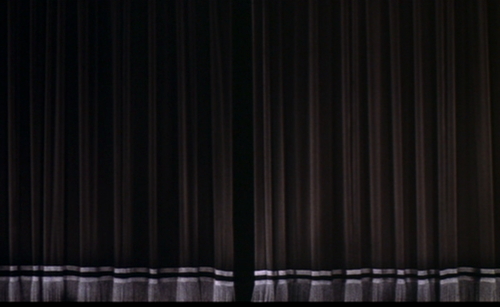 #1) Superman — Fanfare: This is a trumpet flare that announces that Superman is coming. In the movie, we hear it as those first four trumpet notes as the monochrome curtain is opening. (It’s much more developed on the soundtrack album “Theme from Superman” track; the first twenty seconds of that track is the Fanfare.) 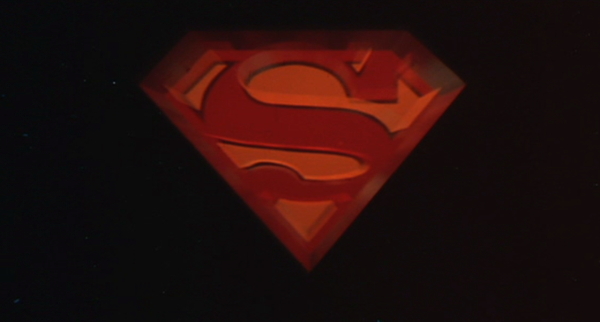 #2) Superman March — A Theme: This is the big one, which starts as the S logo forms and then the “SUPERMAN” title appears. It’s the one where the brass goes dut-dut-dut-DAAAAA! and then continues on like that. You know, it’s the thing that you sing when you’re singing the theme from Superman. (You see? I can write about music. Turns out it’s easy.) 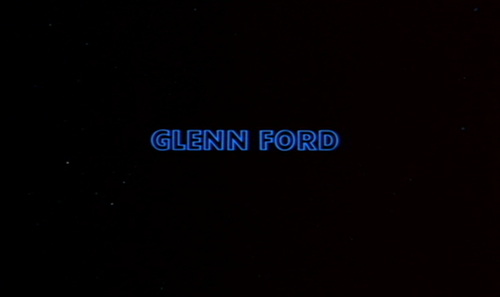 #3) Superman March — B Theme: This is the secondary melody, which starts when the Glenn Ford credit goes by, and the orchestra has the A Theme out of its system. You might ask why you need an A Theme that lasts 30 seconds and then a B Theme that appears right after it, rather than just having one theme and calling it the Superman March. The answer to that question is that I don’t know. 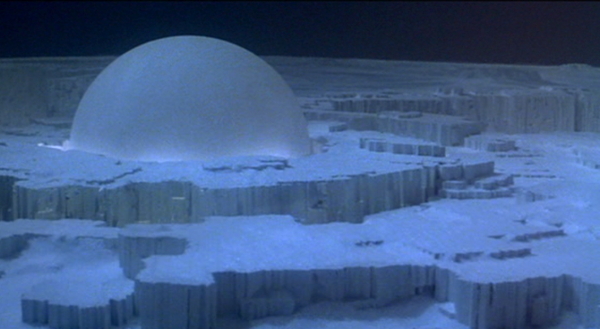 #4) Krypton theme: This is a big statement of how huge and exciting Krypton is, which climaxes as we track into the shot of the dome. 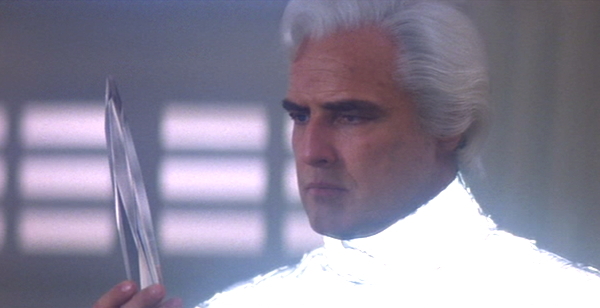 #5) Crystal theme: This is a little five-note motif that starts when Jor-El stares at the crystal and says “He will never be alone.” It pops up throughout the movie to indicate the alien tech, and the radioactive kryptonite.

There are four other leitmotifs, but we haven’t heard them yet, so I’ll come back to those later on.

So far, the music has mostly been there to let you know how big and important and scary and doomed everything is. When something is strange or frightening, John Williams is there to help you recognize that. That is what he does for a living.

Personally, my favorite part of the score so far is the Krypton theme as we get closer to the big white dome. The music just gets bigger and more elaborate as it crescendoes, and I think in the middle somebody runs to ask the other symphony down the hall if they could come in for a minute and help out.

I tried to picture being on a stage and introducing someone using that theme, and wondered who could possibly be so important that they would warrant that intro. All I came up with was if there was a person in the world who had invented the sun. 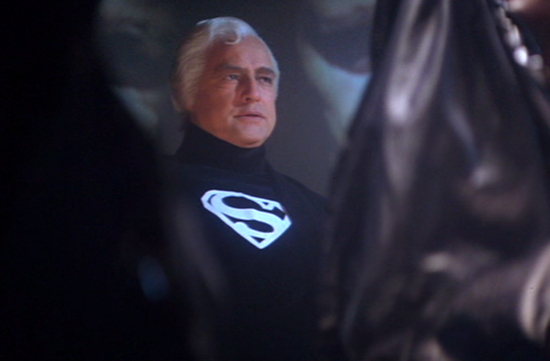 In the trial scene, John lets us know that this is an alien planet by using a bunch of eerie strings and percussion. There’s also the weird zing of an ARP synthesizer, a fully polyphonic keyboard that used top-octave divide-down oscillators, in case you were wondering where all the noise was coming from.

When the big faces on the wall say “Guilty!” there’s the ring of an ominous bell. There are several places during the Krypton scenes when you hear a bell, and it’s not one of those jingle bells or happy wedding day bells; this is more the “everything that you love and believe in will crumble to ash” type bells. People don’t always know about the different types of bells that there are.

It’s important to keep an ear out for these bells because if you hear a lot of them, your planet might be about to blow up. If you hear bells and a spooky wordless chorus of female ghosts, then you need to grab your backpack and head for the nearest exit, which may be behind you. 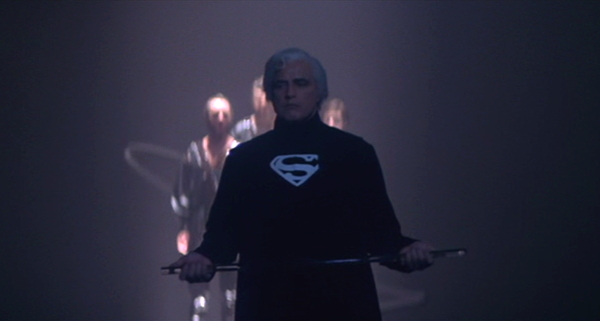 There are more bells and some martial percussion behind Zod while he’s yelling at the outbound Jor-El. The CD booklet says that “an unsympathetic French horn phrase underscores Jor-El’s exit” but I don’t know how you can tell if a French horn is unsympathetic or not.

I don’t need to say much about the music when the criminals are trapped in the Phantom Zone, because it sounds like it always sounds when a huge rotating mirror arrives from outer space and swallows you in eternal torment. 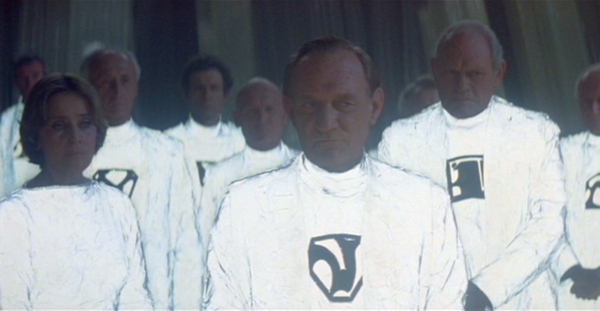 It’s when the Science Council all gang up and form their special shame triangle against Jor-El that you get the bells and the wordless ghost chorus, which should have been a clue for the council that this wasn’t the best choice they could have made. I don’t know why people don’t pay attention to their background music; if I heard that bell and ghost chorus, then I wouldn’t even go outside that day. I’d just stay home with my PlayStation.

The first time you get anything of a warm sound on Krypton is when Jor-El is making his big farewell speech to the baby, which is quite beautiful and I don’t really know anything to say about it. It might be a scherzo for all I know, but I don’t think so. 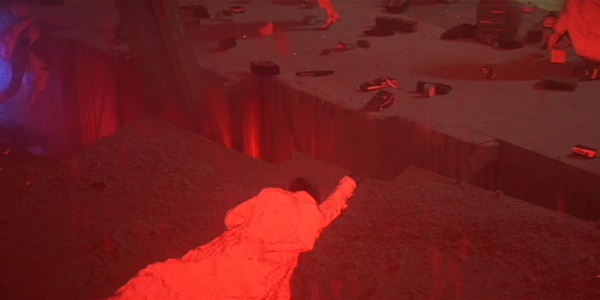 You’d think there would be a lot of music around the destruction of Krypton, but there isn’t; it’s mostly just crunching sounds and screams. John is saving his energy up for that swirling woodwind line during the space capsule’s flight across the sky.

So that is everything that I can think of to say about the musical score, and you are welcome to it. I will now sign off and let people correct all my mistakes and make fun of me in the comments. Go on, you and your lightning bolts!

Tomorrow:
1.15: Journey Across the Gulf of Space! 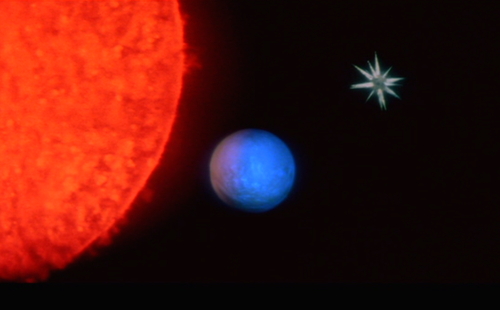