And then, finally, triumphantly: Superman, revealed.

After Krypton and Kansas, after the Arctic and the Elders, after scherzos and Cheerios and Einstein and everything — here he is, looking exactly like we hoped he would. They gave us backstory and atmosphere, and possibly a little extra tedium, just to make sure that we really, really wanted him.

We are ready, and he has arrived. And he doesn’t look ridiculous at all, as we feared he would. He looks magnificent.

And he does what we’ve wanted him to do, most of all: he flies. Calm and purposeful, with his bright red cape trailing behind him, like a king.

Flying is Superman’s killer feature; it’s the thing that everybody loves best about him. When you think about Superman, the first thing that you think of isn’t his strength or his bulletproof body. You think about a man in a red cape, soaring across the sky.

Of course, it’s a clear violation of Jerry Siegel and Joe Shuster’s original intentions for the character. Flying is specifically a thing that he shouldn’t do. And yet, here we are. 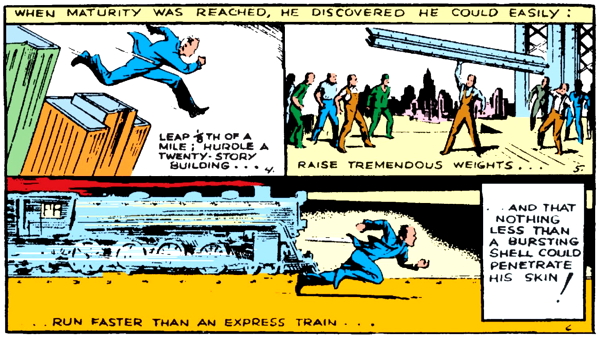 I mean, they couldn’t have been more specific. The man can leap one-eighth of a mile, and hurdle a twenty-story building. That doesn’t leave a lot of wiggle room, as regards auto-aviation. 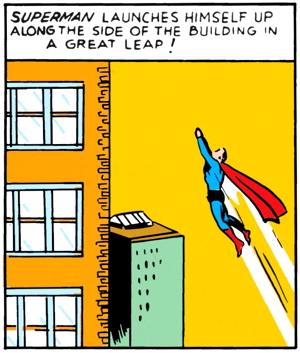 So this is what we get, in the early Siegel & Shuster comics, both in the comic books and the comic strip. He races, he bounds, he streaks, he speeds, he springs and he hurtles — but he doesn’t fly. How could he?

Siegel and Shuster’s Superman was basically a guy — a guy from another planet with a physical structure millions of years advanced from our own, but still a guy. He can punch really hard, jump really high, run really fast and lift really heavy things. Bullets bounce off his chest, and if you give him half a chance, he will definitely knock your house down. But he’s still affected by gravity, and he obeys a vague approximation of the laws of physics. 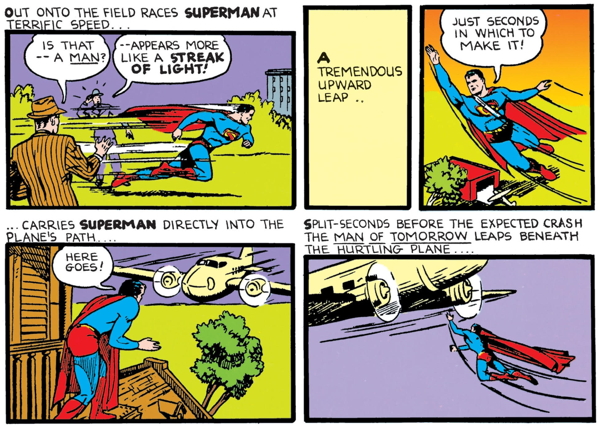 Here’s an example from 1940. Superman races at terrific speed, makes a tremendous upward leap to what looks like the roof of someone’s house, and then makes another leap up to catch a passing plane.

He messes around with the plane for a couple panels, and then heads back down. “Superman strikes earth!” the caption says. “Not pausing, he somersaults back up into the sky!” And then he bounces back up to play with another plane. 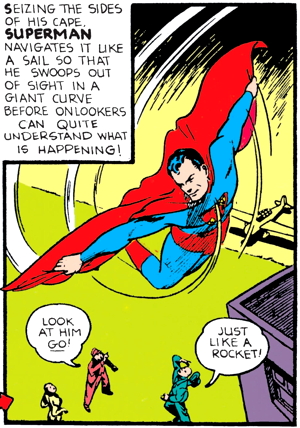 At the end of that sequence, he actually uses his cape to glide back down: “Seizing the sides of his cape, Superman navigates it like a sail so that he swoops out of sight in a giant curve before onlookers can quite understand what is happening!”

So it’s not really physics that we would recognize, but there appear to be limits to what he can do in the air.

Overall, the record is a bit murky, because it’s not always consistent. The above example is from spring 1941, where Superman spends a lot of the story leaping up into the air, and then having lengthy negotiations with people flying by in an invisible helicopter. In that case, the story requires a hero who can hover long enough to say “cease your crooked shenanigans”, which is at least flying-adjacent.

On the level of individual panels, it’s sometimes unclear exactly how he’s getting from one position to another — he’ll arc up in one panel, and then “zoom” straight ahead through the sky in the next — but in general, in the comic books and the comic strip, Superman is still leaping and cape-sailing until late 1943. 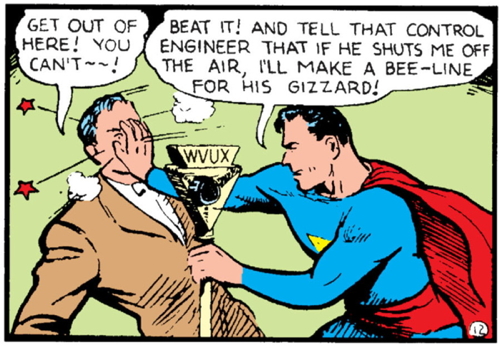 And then there’s the 1940 radio show, when he flies right away; it is literally the first thing that he does.

The first episode premiered on February 12, 1940, and the first words spoken are: “Up in the sky! Look! It’s a bird! It’s a plane! It’s Superman!” These are not things that you say about someone who jumps really far.

Episode 1 of the show is set on Krypton, and ends with the baby in the rocket; at the top of episode 2, the rocket lands on Earth, and Superman is all grown up. The narrator explains:

“The rocket landed in a desert. Superman stepped forth full-grown, to explore this strange new world in which he found himself. Today, as our story continues, we find him hovering, with his curious power, above a quiet highway in Indiana.

“A trolley car is just pulling up the hill, and as Superman wheels and turns in curious flight, unseen below, a man and a boy come out of the shed that serves as waiting room.”

There’s no ambiguity there. He takes one step out of the spaceship, and then goes straight up into the air.

In the radio show, the stunt had to be audible, so they used a rushing-wind sound effect, and Superman would announce everything that he’s doing. He’d say “Up! Up!” when he was rising, and “Faster! Faster!” when he was trying to catch up with somebody. When he had to dive, he would say something like, “There’s Lois’ car — just about to go off the cliff! I can’t let that happen… Down! Down!”

The difference is that Siegel and Shuster were writing the comics, but they didn’t write the radio show; they had nothing to do with it. I don’t know if the radio producers made the conscious decision to change his powers. I think it’s just as likely that they read some of the comics, which were ambiguous, and just assumed that he’d been flying the whole time. 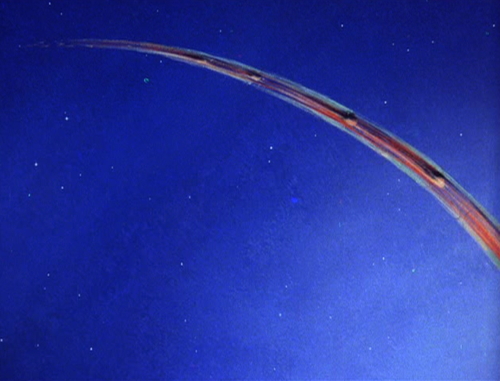 When the Fleischer Studios started making cartoons in 1941, they also began with Superman flying right from the start. The first thing that we see is Superman streaking across the screen in flight, accompanied by the “Up in the sky! Look!” catchphrase from the radio show. 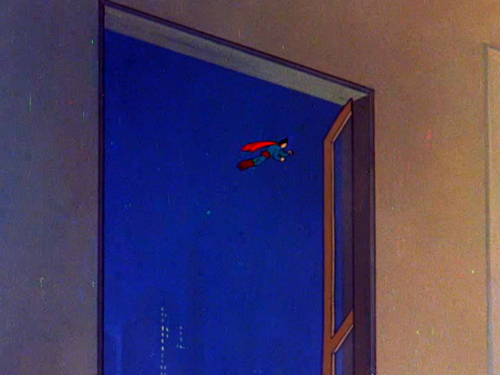 Once the cartoon gets going, and Clark hears that Lois is in danger, he dashes into a storeroom, changes into Superman, and flies out the window. This was just a thing that everyone assumed that Superman did, and it required no explanation. 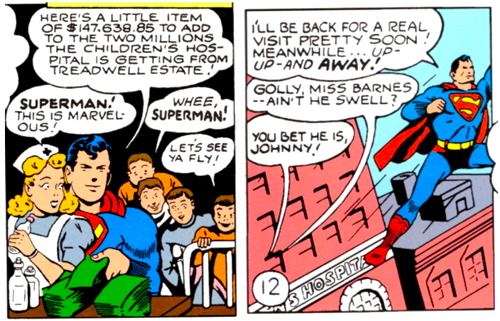 Here’s the generally accepted first example of Superman flying in the comics, in October 1943. Kids in a children’s hospital say, “Let’s see ya fly!” and then in the next panel, Superman cries “Up-up-and away!” as he finally takes flight.

So everybody in America recognized that Superman could fly as of early 1940, when the radio show premiered, but it took more than five years for Siegel & Shuster to admit it, and put it in the comics. That says to me that Superman’s creators were deliberately resisting the idea, because that wasn’t their conception of the character.

After all, it doesn’t make sense that he can fly. He doesn’t have wings, or a propeller. What keeps him in the air? What makes him go faster? When he pushes against something in mid-flight, or catches a falling helicopter, what’s the force on the other end that he’s “standing” on?

Siegel and Shuster were writing science fiction — their Superman did things that you could imagine a really, really strong person could do. But flying? That’s magic. Siegel and Shuster’s Superman was a guy, not a god.

But the impossibility is why we love it, and why it means so much to us. Flying is the thing that Superman shouldn’t be able to do, but he does it anyway; he’s that cool.

That’s why they had to get the flying right, in the movie — not so that we would “believe” it, but because we love the unbelievable. America understood that before Siegel and Shuster did. They caught up with us, eventually.

Tomorrow:
The production hits
the first set of roadblocks…
1.30: After Brando

Tomorrow:
The production hits
the first set of roadblocks…
1.30: After Brando 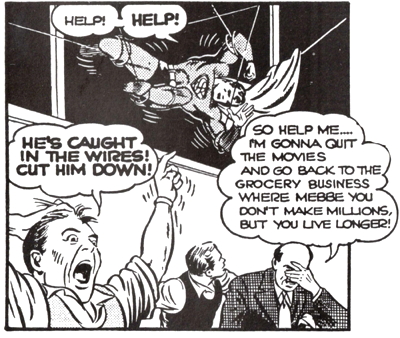