Now, according to the opening credits, the lead characters of Superman: The Movie are Superman’s dad, then the villain, and then Superman, the villain’s sidekick, Superman’s boss, Superman’s foster father, the leader of the Science Council on Krypton, and Lois Lane, which in my opinion is burying… well, the lead.

Personally, I think that the main characters of a romantic comedy are the people who are involved in the romance and the comedy, but, you know, I’m old-fashioned that way. 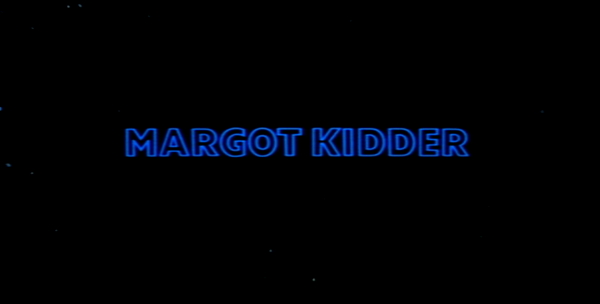 We talked last week about the epic journey to find a guy who could play Superman, which took eighteen months and involved so many people that they ran out of actors and started doing screen tests with dentists.

The process for casting Lois didn’t take as long, because at a certain point you’re either making a movie or you’re not. The search started in late February, once Christopher Reeve was cast in the title role, and went until late April, when Margot Kidder got the part.

Now, the book The Making of Superman: The Movie begins this story with the following statement, and I see no reason why I shouldn’t follow the tradition:

Before long, there was a steady stream of stars flying both ways across the Atlantic, and screen tests were scheduled at Shepperton with very few hours allowed for jet lag. Barbra Streisand was considered and the idea immediately abandoned, since everyone agreed that she was wrong for the part — also, it was doubtful that someone of her superstar status would have submitted to the formality of the screen test Donner insisted upon.

I’m not sure why you need to know that Barbra Streisand came up momentarily in conversation and was then crossed off the list because it wasn’t a good idea, but The Making of seems to think it was important, and I suppose every story has to start somewhere. 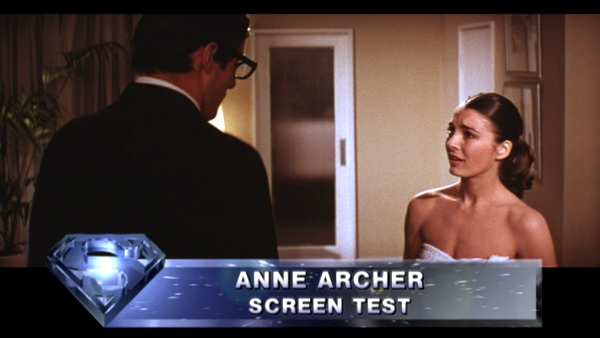 In the screen tests, the prospective Loises performed two scenes with Chris: the balcony interview, ending with Superman’s invitation to fly, and the hotel room scene from Superman II, where Lois tricks Clark into admitting that he’s Superman. (As it turned out, when Michael Thau constructed The Richard Donner Cut of Superman II in 2006, he used Margot Kidder’s screen test to represent the original concept of the scene.)

The hotel room is actually kind of a tough scene to pull off, because a lot of it involves criticizing and/or making fun of Clark, which ultimately is not the point of the scene. If you haven’t seen the Donner Cut, the situation is that Lois and Clark are undercover in a crooked newlyweds’ hotel in Niagara Falls, and he’s come in just as she’s getting out of the shower and putting on makeup.

He’s frustrated, because he would like her to see him as a potential romantic partner, and she provides him with a full-body critique: he slouches all the time, his clothes are dull, his bow tie looks like a letter opener. He complains that he’s tired of being compared with Superman, saying, “maybe I just can’t stand the competition anymore.” She replies, “And just maybe you’ve been the competition, all along.”

He asks what she means, and she ticks off a number of questions: why did Superman suddenly turn up at Niagara Falls, why is he never around when Superman appears, and where did Clark go when Superman showed up today? He keeps on lying and distracting, until she pulls a stunt that makes him admit the truth.

It’s a perilous scene, because it’s possible for the actress to come off as mean — criticizing his looks and his posture, and then interrogating him as he stammers and lies. Superman1978.com has a clip of Susan Blakely’s screen test doing this part of the scene, and it seems like she’s angry at him.

“Well, Clark,” she says, “When Superman appeared, I looked over at that hot dog stand, and you weren’t there. As a matter of fact, you were nowhere to be seen.” She delivers the line like it’s an accusation, as if she’s his wife, suspecting that he’s sneaking off to have an affair. 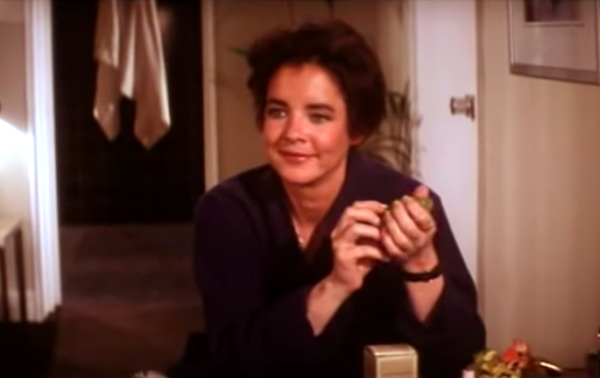 One of the front-runners was Stockard Channing, who was about to become famous as Rizzo in the other big 1978 movie, Grease. You can see some of her screen test on YouTube, and she’s very funny, but she’s also very aware of how funny she is.

Clark says, “In spite of the unreality of all this, you know, posing as newlyweds for the sake of a newspaper story? Well, you know, in spite of myself, actually, I’m kind of starting to feel like one, in a way.”

“A newlywed?” she says, and then turns to look at him. “You?” And then she smirks.

It’s a great smirk, a very strong comedy smirk, but her performance makes the scene about her. He’s the straight man, and she gets the laughs. But at the end of the day, this scene is about getting him to admit that he’s a thunder god, and she doesn’t leave him any room to breathe.

Kidder says all of these lines playfully, and for the lines that could sound harsh — the bowtie that looks like a letter opener, “A newlywed? You?” — she says them a little absent-mindedly, as if they just slipped out.

For the interrogation part of the scene, she jumbles up the words a little bit, so it doesn’t sound like a rehearsed cross-examination. “And why is it always, when I’m with you, until Superman appears, and then you seem to disappear — very conveniently, it seems to me!” Clark says he went for hot dogs, and she responds, “Uh huh, and when Superman appeared, I looked over at that hot dog stand, and you were gone, you weren’t there! Nowhere!”

It’s a ridiculous situation, obviously, asking your co-worker if he turned into an archangel while he was standing on line for hot dogs, but she makes it sounds natural. And she wins, and she’s Lois. 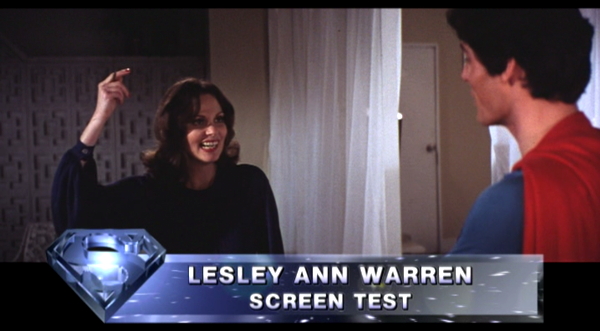 Lesley Ann Warren was the other top choice, and if Margot hadn’t come along then she would have been Lois. From the little bit of the balcony scene that I’ve seen from her screen test, it seems like she’s overplaying it, smiling really broadly and getting very excited, basically broadcasting on all frequencies that this is a thrilling experience.

In Kidder’s test, again, she underplays this. She’s amazed, and somewhat awed, but she’s not jumping around. She just really likes this boy, and he’s offered to take her out for a drive.

So basically, if Barbra Streisand is going to be a snob about this, then forget her; Margot Kidder is the correct choice. 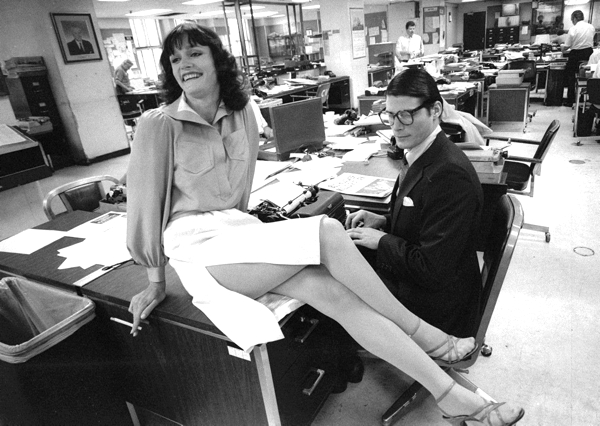 The thing that really appealed to Richard Donner was that she was clumsy. In a 2016 Hollywood Reporter interview, he explained, “I’d seen Margot Kidder in a TV series called Nichols. She was charming and very funny. When I met her in the casting office, she tripped coming in, and I just fell in love with her. It was perfect.”

Donner has talked a lot about Kidder’s endearing flaws; she’s beautiful and smart and funny, and she’s not perfect, and that’s an important part of his vision for Lois.

In the Making of book, Kidder said, “I think that most of what I bring to the role of Lois is myself. I’m manic and I’m overambitious and I’m often frantic and disorganized. I always think I’m being highly efficient when actually I’m not. And that seems to be a part of what Dick Donner wants. The calm side of me belongs in another movie.”

And here’s another Donner quote from 2016: “Let me tell you a funny thing about Margot. When we were shooting, her makeup man comes to me and says: ‘We have a little problem. Margot scratched her eye putting her contacts in.’ I said, ‘Do it without your contacts.’ That day she was wonderful, because she was wide-eyed, with no depth perception. She walked into a desk — and she was the girl I wanted her to be. She said, ‘But I can’t see!’ There was a law after that: Every morning people had to come to me and make sure she didn’t have her contacts in. It just made her wonderful.”

Donner highlights this “amazing-but-flawed” interpretation of Lois right away at the beginning of her first scene, when she asks Jimmy Olsen how to spell “bloodletting” and “massacre”. She’s writing hard-nosed front-page stories, but she’s bad at spelling, and everyone around her becomes her spell-checker. That clumsy, frantic quality makes her Lois very human, and it makes the audience feel protective towards her, and fall in love with her. 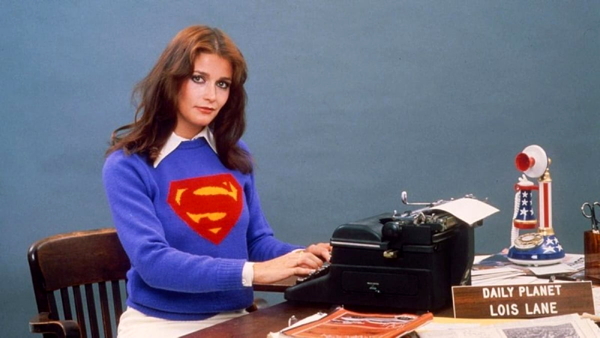 Superman is obviously an idealized figure, specifically constructed to be the best of everything that a man should be. Lois is not the female counterpart of that concept; she’s terrific, but not an unreachable ideal. Even in the early years, when she was haughty and dismissive of Clark, she wasn’t presented as actually being superior to his reporter persona.

Lois in the comics is a bundle of contradictions. She’s an ambitious reporter who fights hard to get a byline on every important story, but she becomes a dreamy romantic when Superman is around. She’s pretty but not stunning, she’s intelligent but can’t see through Clark’s disguise, she’s independent and headstrong but invariably gets into life-threatening trouble that requires Superman’s intervention to survive.

In the excerpt from The Great Superman Book that I quoted yesterday, Michael L. Fleisher observes all of these contradictions as they play out in the comics. He says that Lois loves Superman, but she would do anything to discover his secret identity and announce it to the world — so she must subconsciously despise him, and lash out in retribution for the many ways that his on-again/off-again attention has hurt her.

But it’s also possible to see those contradictions in a more empathetic way, which I think is what Donner is doing by hiring Kidder, and taking her contacts out. Lois contradicts herself and sometimes sabotages her own goals, because she’s human, and that’s a thing that humans do. We want a lot of things that we can’t have, we take the things that we do have for granted, and we act against our own interests, because we’re emotional and impulsive and sometimes short-sighted. We bump into desks all the time. 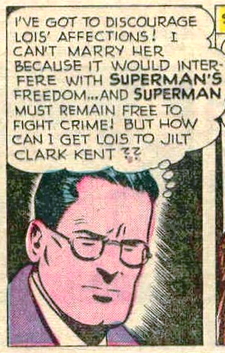 And, as Fleisher also points out in devastating detail, Lois brings out all of the contradictions and indecision in Superman’s psychology, as well. He wants her to fall in love with Clark Kent, but also goes to great lengths to make himself unattractive to her. He relishes the moments when he can dazzle her as Superman and earn her praise and adoration, but then he rejects her in ways that make her visibly unhappy.

Superman can run really fast and jump really high; he can fell mighty oak trees and call down fire from the heavens; he is the biggest and strongest and best at everything — but he can’t figure out how he feels, or what he wants. Lois exposes Superman’s only real flaw, the one that isn’t just a pretense that he uses to protect his secret identity. He has all of the powers that he could possibly wish for, except for his emotional life, which is a mess — because he loves and hates and worships and disparages and pines for the complex, flawed and fascinating woman that he can’t stop thinking about.

That’s the Lois that Donner wants to present in this movie, a character who is so deeply human that she can turn a superpowered extraterrestrial into a human, as well. I don’t think he could have made a better choice than Margot Kidder. He fell in love as soon as she tripped through the door, and so do we, and so does the secret king of the sky.