Now, where was I? Oh, right, Lex Luthor. Last week, I talked about how striking Luthor’s entrance into the movie is — and it needs to be striking, because we’re already an hour into the movie and he’s competing for our attention with a lot of other stuff.

This first visit to the lair lasts about three minutes, and then there’s another fifteen minutes of Superman material — the whole helicopter sequence, and Superman doing his first batch of heroic deeds. Then Lex gets a second scene which lasts less than two minutes, and then there’s another fifteen minutes, full of Superman and Lois’ first date. Luthor’s scheme doesn’t actually begin until more than an hour and a half into the movie.

The fact that he makes an impression at all says a lot about the level of energy that Gene Hackman brings to the role. His Luthor is a bundle of contradictions, especially in his relationship with his subordinates. He says that he longs to be idolized and congratulated, but Miss Teschmacher insults him most of the time, and the sidekick who idolizes him also irritates the hell out of him. Personally, I think he does this to himself on purpose, just for the pleasure of having someone to sneer at.

It’s kind of a miracle that Hackman’s even in the film, really. He was a serious, dramatic actor with Academy Award nominations for Bonnie and Clyde (1967) and I Never Sang for My Father (1970), and a Best Actor Oscar for The French Connection (1971), a crime thriller about a driven cop trying to bust an international heroin smuggling ring. His only role that was even close to this one was a four-minute cameo in the 1974 Mel Brooks film Young Frankenstein, as a blind priest who pours soup into the monster’s lap.

Also, Hackman took the role in July 1976, when Luthor was the worst thing in the script besides the Telly Savalas cameo. This was before Richard Donner and Tom Mankiewicz got involved in the project and rewrote the script; in the version that Hackman signed on for, Luthor chewed on Kleenex tissues through the whole movie.

The story is that Hackman really wanted to be in a movie with Marlon Brando, and he signed shortly after Brando accepted the role of Jor-El. The fact that he wouldn’t share any scenes with Brando didn’t seem to matter; he just wanted to be in the same movie. This story has been told so many times that it seems like we have no choice but to believe it, but it’s an odd thing for a grown-up Oscar-winning actor to do. Still, I guess movie stars are historically just about as eccentric as subterranean supervillains.

As I said on Friday, the one thing that everyone knows about Lex Luthor is that he doesn’t have any hair — a visual hook that makes the character memorable, and instantly recognizable. Richard Donner’s plan was to stay as true to the cultural conception of Superman as possible, and he wanted Luthor to be bald in the film, but Hackman refused.

The solution that Donner came up with was for the vain Luthor to hide his baldness under a series of wigs. In every scene, Hackman’s hair is done differently — curled in different ways, sometimes dyed — to indicate that the character’s hair isn’t real. In the film’s second Luthor sequence, he’s wearing a bathing cap when he’s swimming in the pool, and we see Otis tending to the boss’ wig collection.

There was also a problem with Hackman’s mustache, which required some lateral thinking. This is the anecdote, as Donner tells it in the 2006 book I’ll Be in My Trailer: The Creative Wars Between Directors and Actors:

“I said to Gene Hackman at our initial meeting in Los Angeles for Superman, ‘Look, Lex Luthor is bald and a skull cap is a pain in the ass and it’s going to be hot. Whould you consider shaving your head for the picture?’ He said, ‘No, I’m not shaving my head and I’m not going to wear a skull cap.’ And I said, ‘But Lex Luthor is bald.’ He said, ‘That’s your problem.’ So I said, ‘The mustache? You’d shave your mustache, wouldn’t you? At least that?’ He said, ‘No, the mustache stays.’ And that was kind of it. ‘Good luck. Nice meeting you.’

“Two months later I was over in London when he arrived. I had figured out what to do with the hair: we would present him as a bald guy who wore wigs. On Gene’s first day of shooting I asked the makeup man Stuart Freeborn, one of the really great makeup men, ‘Stuart, does he still have a mustache?’ He said, ‘Yes.’ I said, ‘Come on down to my office and bring your mustache kit.’

“I said, ‘Come on. You shave yours off and I’ll shave mine off.’ First he said no. Then he looked at me and said, ‘Alright, but you do it right now.’ I said, ‘While you’re sitting there, let Stuart take yours off first.’

“I said, ‘Stuart, take off Mr. Hackman’s mustache.’ Stuart started to shake. He knew now what was going down, and it wasn’t going to be pretty. And he shaves off Gene’s mustache. He said, ‘Okay, sit down. You’re next.’ I said, ‘I don’t have to,’ and I peeled the fake mustache off.” 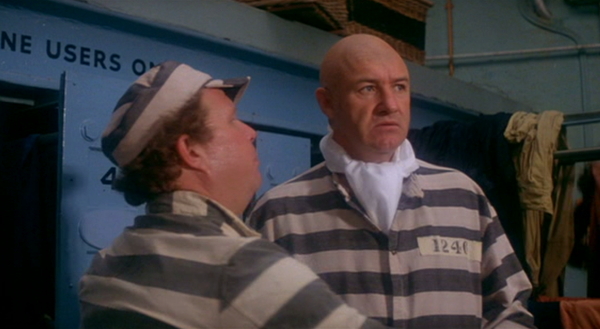 Now, the thing that I don’t know is how they got Hackman to put on the skullcap for the jail sequence used in Superman II. They were filming the two movies at the same time, and the jail scenes were the last that Hackman shot, with Superman bringing the villains to prison for the end of the first movie, and Luthor and Otis’ jailbreak for the second movie.

I haven’t found any stories about why Hackman agreed to play this sequence bald, but maybe they appealed to his sense of verisimilitude. I don’t think prisons let the inmates curate a personal collection of wigs, so it wouldn’t really have made sense for the character to keep his hair.

It’s also possible that he was just worn down by then. Hackman started filming in May 1977 with the Fortress of Solitude scenes from Superman II, and by the time they got to the jail, it was mid-October. Hackman was getting frustrated with the process, as the shoot got more complicated and Donner had to split his time between different units, so at that point, maybe you just put on the skullcap and get through the scenes.

Another of the film’s Lex Luthor innovations is to give him a specific motivation and backstory, which he’d never really had before. I wrote last week about Luthor’s introduction in 1940, and back then, he was just a demented genius who wanted to dominate the entire world, in whatever way he could manage it. That was pretty standard for villains in pulp fiction and movie serials, who didn’t need a reason to go and do villainous things; they were plot generators, and they didn’t have to be three-dimensional characters.

But 1978 Luthor has a specific goal, which he explains to his staff for what must be the thousandth time.

Luthor:  At last, it’s official. Thanks to the generous help of the United States government, we are about to be involved in the greatest real estate swindle of all time.

Eve:  Lex, what is this obsession with real estate? All the time: land, land, land!

Luthor:  Miss Teschmacher, when I was six years old, my father said to me —

Luthor:  (chuckles) Before that. He said, ‘Son, stocks may rise and fall. Utilities and transportation systems may collapse. People are no damn good. But they will always need land, and they will pay through the nose to get it.’ Remember, my father said:

So that’s brand new — a relationship with Luthor’s father, which is sketched out economically over a few sentences. In the script at this point, Luthor actually mentioned him by name:

EVE
Then your father must have been sick too.

LUTHOR
(sad nod)
Arnold “Buster” Luthor.
The most inept check forger of his day.
A pity he didn’t see how,
from such humble beginnings,
I created an empire…

The “inept check forger” line was cut in the movie, because you don’t really need it. Luthor quoting his father, and acknowledging the “get out” interruption, tells us where Luthor is coming from, and how he grew into the frustrated, complicated criminal genius that he is.

We’re not going to see this crew for another fifteen minutes, but this three-minute scene is enough to establish a memorable, interesting trio of villains that we’ll look forward to seeing again, after the helicopter and the car chase.