“Her light is growing faint,” Peter says, “and if it goes out, that means she is dead! She says…” Dramatic pause. “She thinks she could get well again if children believed in fairies!”

The children in the audience stir, surprised, as Peter Pan turns to implore them from across the footlights. Their attention isn’t enough, all of a sudden. “Do you believe in fairies?” he asks them. “Say quick that you believe! If you believe, clap your hands!”

They clap, of course. What else could they do? J.M. Barrie has constructed a dramatic trap that snaps shut on every kid in the theater: if Tinker Bell dies, then you personally are an asshole.

Which brings us to Superman’s helicopter rescue, a formal Ritual of Summoning disguised as an action sequence.

We are currently at minute sixty-seven in this movie about Superman, and so far we haven’t seen him do anything, except talk to his dad and get turned down for a dinner date. We have waited, semi-patiently, through Krypton’s destruction and leaving the farm and building the Fortress and getting a job, all the way up to Clark getting his coat stuck in the ladies’ room door, and it’s still not enough to get Superman on the screen. They want us to clap, too.

So this sequence is all about setting up a situation that makes us desperately long for Superman to come along and put an end to it. And then it keeps going for another forty-five seconds, deliberately dragging out the suspense beyond human endurance in order to build anticipation and desire.

It begins with what appears to be an unnecessarily long explanation of what a helicopter is and what we want to use it for, as ground control informs Daily Planet Copter 1 that Miss Lane is taking a quick ride to Metropolis Airport to meet Air Force One. It’s a hurry flight, ground says. The copter says roger, and ground rattles off some statistics re: the gusting and the altimeter. Ground is always going on about stuff like that.

We see Lois crossing the landing pad in a stylish yellow outfit, which means that everything’s ready, on this end.

And dang it, the helicopter still hasn’t landed; there’s another five shots before it touches down. I thought this was a hurry flight.

As Lois hustles to board the copter, we see a shot of an angry cable fastened to the ground, twanging ominously. This is the villain of the sequence, this schmuck of a cable, which must have some kind of grudge against Lois. I don’t know what you have to do to piss off a cable so bad that it tries to murder you, but maybe it hates traditional news outlets, and once all the reporters are dead, it plans to start its own cable news network. Thank you, I’m here all week.

Unsuspecting, Lois boards the helicopter, and to close the door, a jumpsuited assistant has to shove with his full weight on it, twice. I don’t know where the Daily Planet gets its news choppers from, but maybe it should spend a little less money on the branded jumpsuits and a little more on helicopter doors that close properly. You think you can get by with discount helicopter doors, but you’re going to regret it, two or three Darwin Awards from now.

And then the helicopter just takes off, without doing crosscheck and all-call or anything. But I should stop criticizing the helicopter service; it’s blaming the victim.

You can tell whose fault this is, because they keep cutting to shots of the cable, cursing and spluttering and writing furious manifestos. There’s nothing you can do when you run up against a cable like this, except tend to the wounded and write apologetic telegrams to the victims’ families.

So I suppose it’s inevitable that something snaps, and the cable lashes out at the helicopter, disrupting its rotational stability and throwing everything off-kilter. I don’t know enough about helicopter science to explain to you how this situation leads to an immediate failure state, but shit goes wrong immediately and it does not get any better from here.

There are a lot of quick shots from inside the helicopter, as the pilot grabs at his controls and struggles to do something meaningful.

We cut back and forth from the pilot’s face to his hands to Lois, as she comes to grips with the escalating aviation emergency.

Then there’s a very upsetting shot from a weird angle high above the helipad, where we see the helicopter spinning unsteadily in worrying circles, and the cowardly ground crew running for cover.

The first really scary moment is when the tail of the helicopter smashes through the little waiting room area, taking out a stretch of plate glass windows and endangering the Coke machine.

The helicopter spins wildly toward the edge of the building, and catches on a railing, which stops it short, resulting in a shower of electric sparks, and then a bunch of things happen very quickly.

This is when the pilot bangs his head and loses consciousness, and no longer takes an active part in the proceedings. Again, I don’t want to be too judgmental with the personnel, but I prefer it when the pilot stays awake for the entire crisis.

Then the helicopter catches on fire somehow; I’m not sure what the logic is around that. This is very upsetting for the Lois and pilot-shaped crash test dummies that are understandably subbing in for the movie stars, for the duration of this shot.

The copter gives another hair-raising twitch, and Lois slides toward the door —

— and the door swings open —

And there’s the first money shot of the sequence, a vertiginous straight-down look at the Metropolis street, as viewed from a position that nobody should be viewing it from.

So now we’ve established the terrifying peril that Lois is in. Our hearts are racing, and we know that the only way she’s going to get out of this alive is for Superman to swoop in and save the day.

There is now a full two minutes until Superman swoops in and saves the day.

At this point, there’s a shot of Lois’ yellow hat falling out of the helicopter down to the street below. That hat is going to hit the pavement in front of Clark seventy seconds from now. I looked up the rate of speed for a yellow cloche hat in freefall, and if it takes 70 seconds to reach the street, then the building must be 14.9 miles tall, or 5,630 stories. That’s a long way to go, for a little hat. It’s no wonder it was so hard for Clark to catch an elevator in the last scene; a fifteen mile vertical commute is no joke.

This is when the rest of New York gets involved, gathering together in a tightly-packed group and anxiously bystanding. It’s not easy to get New Yorkers to look up, and it’s even harder to get them to recognize that the burning helicopter has nowhere to fall except directly onto them. New Yorkers in superhero movies are tremendously blasé about their own personal safety; just wait until the second movie, when they continue to order dinner right next to an eight-minute taxicab throwing contest.

Determined to fight her way out of this, Lois unbuckles her seatbelt and tries climbing over the unconscious pilot to some kind of safety. This turns out not to be the right answer, but it is seriously badass, and if you didn’t already like Lois to the fullest possible extent, then you’d have to admire her now.

Then we see a couple of entirely thrilling upshots of the helicopter teetering on the edge of the roof.

We’ll get into the “how’d they do that” tomorrow, but this shot is essentially adding an extra building on top of the actual building, for maximum peril.

Then there are a bunch of shots of the chaos which is breaking out at street level; it’s absolute mayhem down here. Several police cars show up, as the cops try to keep order.

And I don’t know what kind of day you’re having, but if you need something to cheer you up, then I recommend looking at this shot of a skinny cop with weirdly long arms who’s running like Phoebe from Friends. It only lasts for three seconds, but it is gorgeous, and it gets better the more times you watch it.

Meanwhile, the upshots are getting increasingly dire. If they keep going like this, then pretty soon the cinematographer will be working from a prone position, next stop underground.

But the movie is successfully amplifying the anxiety by adding an extra audience on top of the existing audience, who are even more worried about this than you are.

This goes on approximately forever. John Williams is providing a score that at this point is basically just overlapping tension stings.

The situation upstairs continues to degrade, as Lois learns how few things there are in a helicopter cockpit that you can grab onto in an emergency, up to and including the pilot.

And then she falls all the way out of the helicopter and just dangles, clutching onto the seatbelt which is surprisingly sturdy, for this helicopter. The rest of the chopper is falling to pieces and sporadically catching fire, but Lois clings to that seatbelt for way longer than you’d imagine.

So here we are, sixty seconds deep into a fight for life scenario, and we know that the only way out of this is for Superman to finally emerge from behind the eyewear and take charge of things.

And that’s when Clark strolls out of the Daily Planet building and finds a hat on the ground, and we are still a minute away from seeing Superman catch Lois.

By this point, all of us — the horrified crowd that includes the audience, the onlookers and possibly even the people in the next theater over — are absolutely certain that what we need most in life is for this guy to take off his clothes and make with the flying.

Yes, it might look silly for a grown man to wear a primary-colors supersuit. It might not be realistic that a guy can jump into the air and catch a falling reporter. We don’t care.

“Say quick if you believe!” Peter says, and we clap our hands, summoning the superhero into our lives. We believe.

Tomorrow:
Behind the scenes of
the helicopter rescue sequence
1.53: The Heights 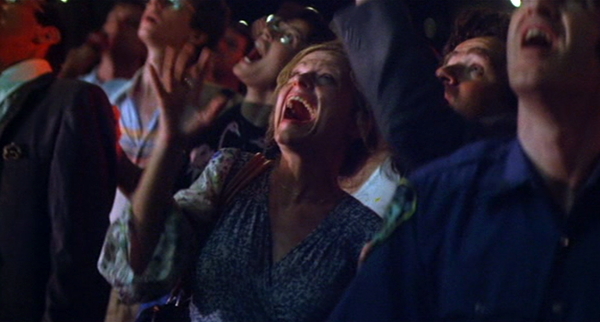