It’s one of the silliest party tricks in fiction. A contestant appears at the door of 221B Baker Street, and the great detective observes, “Beyond the obvious facts that he has at some time done manual labour, that he takes snuff, that he is a Freemason, that he has been in China, and that he has done a considerable amount of writing lately, I can deduce nothing else.”

These are just sound effects, obviously, because it’s all a setup. Arthur Conan Doyle deliberately festoons these chumps with splashes of mud from a specific area where the clay is a unique shade of ochre, just to impress us with Sherlock’s amazing ability to deduce things from the clues that Doyle put there to be deducted upon. The author already knows where the treasure is; all the character has to do is dig.

But Lex Luthor needs to head for higher ground, because he’s just suffered an extensive gutpunch to the ego, and he needs to prove, to himself and to all of us, that he’s still an interesting character. It’s important to Lex to be famous and admired, and now some goody two-shoes spaceman is grabbing all the headline space.

The thing that hurts, obviously, is that these are all qualities that Luthor doesn’t have, and in the narcissist zero-sum game that he plays with every other living human, any compliment given to somebody else is an attack on him.

Reaching the top of the hill, Luthor delivers a brief sermon.

“Miss Teschmacher, some people can read War and Peace, and come away thinking it’s a simple adventure story. Others can read the ingredients on a chewing gum wrapper, and unlock the secrets of the universe.”

It’s a great line, but it doesn’t land. He’s purposely surrounded himself with ding-dongs, and that has conversational consequences.

In a willful act of ding-dongery, Otis eagerly grabs the ladder that Lex is standing on and moves it over to the other side of the room, stranding his boss up in the rafters. This is uncomfortable for Luthor, because it’s another reminder of his inadequacy: Superman can soar through the air at will, but Lex needs people to push ladders under him.

Once that’s settled, Lex makes with the Sherlock Holmes impression, and like Sherlock, it’s not actually based on very much evidence.

“In the interview, he says that the planet Krypton exploded in 1948,” Lex sighs. “The ridiculous little freak. It took three years in a rocket ship to get to Earth. Ergo…” There’s a little break for another moment to make fun of Otis, and we never do find out ergo what.

“Now, think, people, think!” Luthor barks. “Deductive reasoning, that’s the name of the game.” It usually is. “Fragments from the planet Krypton exploded, and went into outer space. It is reasonable to assume that some of those particles of debris drifted to Earth.”

Eve gets very excited about the word “Meteorites!” and Luthor nods, “Jawohl.” I have no idea why he says that. I like this scene a lot, but it is eccentric to the point of incoherence a lot of the time.

“And voila!” he smirks, ripping a page out of an old issue of National Geographic. It’s passed on to Otis and Eve with supplementary voilas, and we see a guy in Addis Ababa holding a big green chunk of somebody else’s planet.

Correctly, Eve asks, “So what?” and that’s when we get the big deduction.

The vital plot point that follows does not make any logical sense. Lex is about to reach into hammerspace and pull out some information that is not based on National Geographic, or anything at all. And we are expected to believe what he says, and admire how clever he is.

That’s why he has this crazy-looking library area, stocked with information on who knows what. Sitting up on high with the accumulated knowledge of the world arrayed behind him, he is in a position — visually, if not logically — to deliver an astonishing insight.

“To us, they are just meteorites? Fair enough. But — the level of specific radioactivity is so high to anyone from the planet Krypton, this substance is lethal!”

And then there is the symbolic awakening of the ding-dongs.

“Wait a minute, Mister Luth-or,” Otis attempts, “you mean fire and bullets can’t hurt this guy, but this stuff here —” and then Eve joins in as well — “will kill him!”

All of that noise is there to distract you from the fact that this conclusion came out of entirely nowhere. Lex sees a picture of a guy with a green meteorite, and somehow knows that a) it came from Krypton in the first place, b) it has a level of specific radioactivity, and c) that level of radioactivity will be harmful to Kryptonians, and nobody even knew that Krypton existed before Lois published her interview this morning.

But Lex is acting like this is the obvious conclusion to draw, and Otis and Eve are indicating to the audience that this is true and makes total sense.

Then they do the same routine over again, this time explaining that Luthor is going to hide the kryptonite in lead, which was correctly planted in the previous scene and is actually clever. Eve does the same performative appreciation of this part of the plan, which seals up the scene and encourages you to stop wondering how Lex figured out it was kryptonite.

And we forgive the scene for this leap in logic, because everyone in the audience who’s lived in America for very long is already aware that there’s a thing called kryptonite and it’s Superman’s only weakness, and we agree that it would be more interesting to have a Superman movie with kryptonite in it. Movies don’t actually need logic; they just need to set up situations where they give the audience what we want. We will accept any coincidence, last-minute miracle or impossible act of deductive reasoning, as long as we agree that a given plot twist would make the movie more interesting or emotionally satisfying.

So, sure, if going to Addis Ababa finally gets the villain up out of the basement and into the sunlight to go play tricks on army men, then screw it; let’s get going. I’m not a Freemason and I haven’t been to China, but I have definitely been doing a considerable amount of writing lately, and I could use something new to write about. 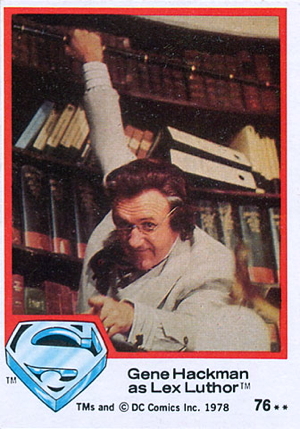 Join 127 other followers
My Tweets