So here’s how to torpedo your own film in six words, courtesy of Army Archerd’s Hollywood gossip colum in Variety:

Producer Pierre Spengler allows that he and Superman director Dick Donner differed during filming, but he says all’s now well, and Spengler expects to return to complete Superman II. Donner, however, declares, “If he’s on it — I’m not.“

It’s late December 1978, and Superman: The Movie has just opened in theaters to, if you’ll pardon the expression, boffo box office. Everybody who worked on the film is feeling that Christmas spirit — except for Richard Donner, who fucking hates Pierre Spengler, and is not shy about letting people know his truth.

In fact, here he is in Starlog magazine:

“Yeah,” the director says with a sigh. “I didn’t get along with the producers at all. I got along with the Salkinds all right, but I didn’t get on with Pierre Spengler. I told him to his face that the film was too big for him but he wouldn’t face up to that responsibility.”

“As far as I was concerned, he didn’t have any knowledge at all about producing a film like that. If he’d been smart, he’d have just laid back and let us do it. So, not only did we end up producing it, in a sense, but we also had to counter-produce what he was doing.”

Now, the thing that’s not Mensa-level brilliant about Donner’s behavior is that he and Spengler and the Salkinds are supposed to head back to Pinewood Studios soon, and finish their work on Superman II.

The original plan had been to shoot both the first movie and the sequel at the same time, and they shot a lot of the Superman II scenes during the long production period. But everything was hard and took way longer than they thought it would, so at a certain point, they said, You know what? Let’s just get the first film completed, and we’ll worry about the sequel after the first one is released.

So they’ve got about 75% of the scenes for Superman II already in the can, including all of the scenes with the really expensive people — Marlon Brando (Jor-El) and Gene Hackman (Lex Luthor). The Daily Planet scenes are done, ditto the Fortress of Solitude, the White House, the prison break and the moon.

But they haven’t done any of the location shooting in Niagara Falls, or the villains’ wave of destruction. They haven’t done the crucial “honeymoon hotel” scenes, or the battle for Metropolis. 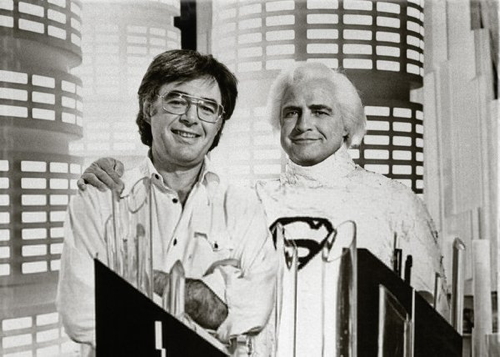 To finish all this work, the original team was supposed to go back to Pinewood for another couple of months, and get the rest of the film in the can. So January 1979 may not be a great time to say something like this to a Variety reporter:

Reflecting on the film’s success, Donner also insisted that producers Alexander and Ilya Salkind “negotiate in good faith” for the sequel if he is to direct it.

“That means no games,” Donner elaborated. “They have to want me to do it. It has to be on my terms, and I don’t mean financially. I mean control.”

That phrase, “reflecting on the film’s success,” is the key to this display of bad temper. Now that Superman is a runaway hit, he thinks that they need him to come back, and turn Superman II into an even bigger hit.

But students of mythology will know: Don’t mess with the gods.

Blow, winds, and crack your cheeks! says Richard Donner as King Lear, dashing about on a heath and declaiming into a stormy sky. You sulphurous and thought-executing fires, vaunt-couriers to oak-cleaving thunderbolts! Negotiate with me, in good faith!

When Ilya talks about the Salkinds’ inevitable decision to fire Donner and replace him with another director, there are two Donner quotes that sealed his fate:

It has to be on my terms. I mean control.

Donner is correct about Spengler being incompetent; the only reason that he was involved in the picture is because he was Ilya’s best friend. After the Superman movies, Spengler never worked on anything successful ever again.

But publicly insulting the gods’ best friend is not going to get you anywhere in the negotiations; it just pisses them off. And Ilya knew what “control” meant for Donner; it meant another years-long shoot that costs who knows how many millions of dollars.

Ilya says that he tried to contact Donner to see if he could negotiate a peace settlement, but he couldn’t reach him. Donner was out on a promotional tour in five European countries, to promote the foreign openings for Superman, and in those days, it was legitimately difficult to contact somebody who was traveling overseas.

When Donner came home and wanted to get back to work on the new film, he received a telegram, informing him that his services were no longer required. They were hiring another director to finish Superman II.

Now, it may sound like I’m blaming Donner, and I’m not, really. He really was the one who turned Superman into a hit movie, and firing Donner was just the first of several stupid “Art vs Commerce” decisions that the Salkinds made, which ultimately destroyed the franchise.

Still, Donner knew that the Salkinds wanted to fire him, and they were stupid enough to do it. It turned out those oak-cleaving thunderbolts weren’t just for show, after all.

Tomorrow:
Ilya explains it all in
2.2: It Wasn’t Ilya’s Fault