Let us speak, then, of comedy.

Donner’s comedy was mostly verbal. Basically, as soon as the film sets foot in Metropolis, everyone starts wisecracking and never stops. Everyone at the Daily Planet is funny, all of the villains are funny, the big scene between Superman and Lois is a romantic comedy sequence. Everybody talks fast, and they talk a lot.

Lester’s comedy is more visual than verbal, and the best example that I have is the scene that just happens to be coming up right now, when Superman crosses the road and causes a traffic accident. In many ways, this scene embodies Lester’s approach to the film, and the fact that it sucks does not bode well for the future of the franchise.

To start with, the visual continuity’s all wrong. The sequence opens with the same establishing shot that Donner used in Superman: The Movie, filmed on location in New York, outside the Daily News Building on E. 42nd Street. The camera is currently pointing west, with the ornate Art Deco facade of the Daily Planet on the left.

Having established that, we now cut to a set at Pinewood Studios, and we’re facing the wrong way.

Clark and Lois are on opposite sides of the street, walking towards us. Clark’s on the left, Lois is on the right, and according to the establishing shot, the Daily Planet building should be on Clark’s side. But it isn’t, which I find irritating on a level that I am not able to fully convey.

It’s not like there’s any behind-the-scenes production reason why they didn’t build the set to match the establishing shot. They just didn’t care enough. There’s going to be a lot of that, coming up.

Clark sees Lois walking on the other side of the street, and calls out, “Hi, Lois!” She returns his greeting, and keeps walking.

Then we see the following sequence of shots:

There’s something wrong with that sequence, but I’m not sure that I can explain it. It makes me wish that I’d actually read that Film Directing: Shot By Shot book that I bought several months ago, rather than put it on my bookshelf and hope that I get smarter just by looking at the spine once in a while.

I think it might be the second shot that I find disorienting. The action is a simple T shape: Clark crossing from left to right, with the taxicab arriving to meet him at the midpoint. But that second shot suddenly puts us at a weird angle that I don’t think works.

The other disorienting thing about it is that Lester is cutting around the thing that actually happened, in order to save the visual punchline for the end of the scene. So you see Clark walking, the taxi driver screaming, and something happens — but you don’t know what it is, and most importantly, nobody in the scene reacts to the event in an appropriate way.

The driver leaps out of the door, to check the front of the car… 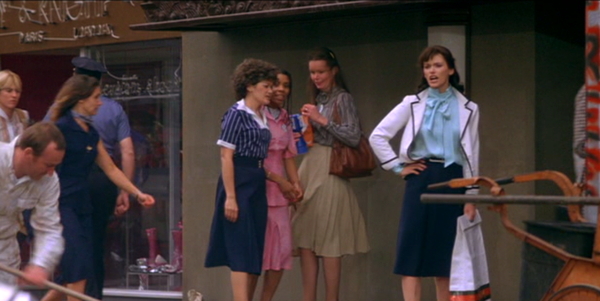 and Lois shouts an annoyed: “Clark!”

As he hurries to join her, she chides, “You ever heard of crosswalks?”

As he reaches her, she continues, “Do you have any idea how stupid that was?”

And then we get the punchline: the taxi ran into the secretly invulnerable Clark Kent, and is now smashed up. There’s steam coming out of the wreck, and the sound of bubbling liquid.

To close the scene, the driver looks at the retreating Clark, and shouts, “Freak!” Then he looks back at the car, muttering, “That’s all I need…”

So here’s why I hate that scene.

#1) Clark has just destroyed someone else’s property, and he doesn’t care. The driver needs to drive this cab to earn his living; this is a huge problem for him — and Clark just looks down, absently notices the damage that he’s done, and keeps on walking. This is not how Superman should behave.

#2) Lois has just watched Clark get hit by a car, and wreck the car. She is looking right at him when it happens, and her dialogue makes it clear that she has taken in the entire scene. The damaged car is clearly in her line of sight. But she doesn’t notice that anything’s strange, which feeds into the annoying “superstar reporter Lois Lane is too stupid to notice what’s in front of her” concept.

#3) The driver has just had a moment of terror, an income-threatening accident and a brush with the supernatural, and his reaction is incredibly blasé. Under any circumstances, a New York cab driver would be yelling at the guy, even if it was a mild inconvenience and not an extra-terrestrial mystery. He correctly labels Clark as a “freak”, but then he allows the cryptid to walk out of his life, without asking any questions or trying to get compensation.

In other words, nobody involved in this situation acts in a comprehensible way, which in my opinion ruins the joke. Donner said that his guiding principle was “verisimilitude” — that even though there’s a crazy space angel walking around Metropolis, everyone should be reacting to it in a realistic way. I think that this scene is exactly what Donner wanted to avoid, a moment that bends everybody’s psychology out of shape, in order to justify a comic punchline that frankly isn’t worth the trouble.

I think that this is Lester’s style of comedy — setting up visual set pieces that are exaggerated and unreal. There’s a similar moment in the next scene, when Clark tries to use Lois’ juicer, and crushes his thumb with an agonizing, audible crunch — with Lois looking directly at him, and not reacting in any way. It’s not a particularly funny joke, and once again it requires Lois to be oblivious to what’s happening right in front of her. 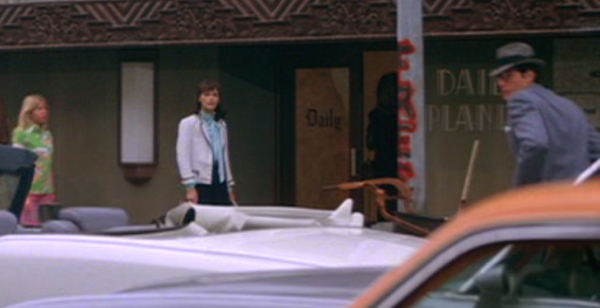 And while I’m at it, that Daily Planet facade doesn’t match the establishing shot in any way. I could accept excuses if it was just a matter of not reproducing all of the fiddly Art Deco features, but this isn’t even close. The Daily Planet sign is in the wrong place, it’s much smaller, and they didn’t even bother putting in a revolving door. The sidewalk is way too narrow, and the fruit and vegetable seller is nowhere to be seen. Also, it’s on the wrong side of the street.

Now, the one thing that everyone says about Richard Lester is that he got things done on time. He kept to a budget, he kept to a schedule, and if something wasn’t quite good enough, then he did as well as he could and then moved on. That made the Salkinds happy, which is nice, but I think this scene demonstrates the limitations of that approach, from the audience’s perspective.

This scene has bad staging, bad visual continuity and an extremely lazy attitude toward set design and construction, supporting a joke that doesn’t make sense for the characters and isn’t particularly funny. I hate to be so negative like this right from the jump, but we are two sequences into this movie, and my optimism is waning.

Tomorrow:
Lois makes juice in her new office in
2.8: Orange You Glad

We’re going to see that cabbie again at the end of the movie, reacting to the Superman/Phantom Zoner fight. Apparently, he got the car fixed, just in time for it to be blown down the street and through a plate glass window, possibly with him inside.

Tomorrow:
Lois makes juice in her new office in
2.8: Orange You Glad 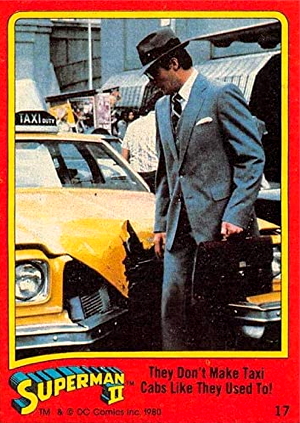