Okay, so we’ve currently got Clark Kent and Lois Lane locked up in a fuzzy pink honeymoon box, and we’re planning to keep them there until they make some progress on their relationship. It’s tough love, for sure, but they’ve spent more than forty years avoiding the obvious, and unless we do something about it, Lois is going to start throwing herself off of things again.

But this is a major turning point in the Superman/Lois relationship, and you can’t take that step lightly. In fact, in 1977 — a year before the first Superman movie was released — a panel of Superman writers, artists and editors were assembled to take part in a Super-Symposium.

It was such a big deal that they gave it four text pages in DC Special #5, asking the question: “SHOULD SUPERMAN MARRY LOIS LANE?”

On the whole, the answer was no. Of the ten people involved, only two of them said yes, and they happened to be the only women who participated, so that should give you some idea of how this is going to play out.

Should Superman marry Lois Lane? I mulled the question over in my mind for quite a while, and the answer came back a resounding NO! After all, would the Lone Ranger marry Tonto? Would Starsky marry Hutch? Would Charlie Chan marry his number one Son? Of course not, at least not without destroying the very precepts each series is based on. Marry Superman to Lois Lane, and you take away almost 40 years of the great American mythos.

So that’s what happens when Len Wein mulls things over for a while; he thinks about gay incestuous Chinese love affairs. But this response gets right to the heart of the question: Is change inherently destructive? To Wein, changing the status quo after four decades would take years of the mythos and destroy the very precepts, which if I understood what that meant, I would probably disagree with it.

And he was far from alone. Here’s Superman co-creator Jerry Siegel’s response:

I don’t think it would be good for the longevity of the Superman comic books. Once the novelty of such a unique change in format wore off, we would be stuck with too drastic an alteration from the original and successful premise.

Now, I have to admit that “why mess with success” is a reasonable point of view — the current configuration of Superman, Lois, Perry and Jimmy had been successful in the comic book, the radio show and the television show, reaching a peak of popularity in the late 50s, and you screw with that kind of thing at your peril.

Still, over those four decades, they’d introduced a lot of lasting changes to the original premise, including Superboy, Supergirl, the Phantom Zone, the Fortress of Solitude and the Bottle City of Kandor, the development of Lex Luthor and other supervillains, and so on. In fact, during the 1970s, they made some highly-publicized changes like moving Clark and Lois from the Daily Planet to a TV station, and neutralizing Kryptonite (sort of). The 70s production team was open to making changes to the status quo… but not this one.

In fact, Denny O’Neil — the writer who came up with the “Kryptonite Nevermore” story arc — suddenly turned conservative when he was asked about marriage:

Superman marry Lois Lane? This is asked in jest, I hope. Look, Dante didn’t marry Beatrice and Cyrano didn’t marry Roxane and Troilus didn’t marry Cressida and that’s all to the good. Marriage has never been a part of the really major romances except for that of Othello and Desdemona, and as soon as they said the vows they began to have such troubles as you wouldn’t believe. Unrequited loves are the big crowd pleasers: they’re so wonderfully pristine and unmessy.

This appreciation of the unmessy is striking, because it’s the opposite of what a writer ought to want. If you have to generate four comic book stories about Superman plus multiple spin-offs every month until the end of human civilization, “messy” is exactly what you need more of. Mess generates story.

O’Neil’s comment about Othello and Desdemona is especially peculiar: “as soon as they said the vows they began to have such trouble as you wouldn’t believe.” That “trouble” that he refers to is called Othello; it’s the entire substance of the play. He seems to be concerned about whether the characters are happy or unhappy inside the story, which is not how this works.

Writer Gerry Conway had a similar worry, which he expressed in a confusing way that I don’t actually understand.

Let’s face it, if ever a relationship was doomed to failure, it’s the Clark-Lois-Superman triangle. The girl is just too suspicious, pushy and critical; ordinarily, in your average hysterical relationship, these traits might be an asset, but when you’re dealing with an orphan Kryptonian unsure of his own place in the world — forget it.

I mean, I probably understand the point that he’s trying to get across, which is that they’d be unhappy, but after the semicolon, I don’t understand a word that he’s saying. Being critical wouldn’t be an asset for dealing with an unsure orphan Kryptonian?

Len Wein got a bit cryptic as well: “Lois Lane married to Superman would very likely become Nancy and Sluggo in long blue underwear.” No clue.

But the main concern is that marriage is boring, and that being in a relationship with a woman reduces your masculine power. Two out of the ten respondents mention taking out the garbage as a mundane task that Superman couldn’t be expected to perform, and four of them specifically worried about a powerful alpha male raising children.

Instead of Superman being primarily concerned with using his almost limitless abilities to help a troubled world, he would be diverted into worrying about such matters as if his baby needed to have its diaper changed, and hoping that his super-memory wouldn’t falter so that, God forbid, he might forget the wedding anniversary of Lois and himself.

And a new writer, Elizabeth Smith:

His world-saving propensities don’t allow scope for such mundane details as taking garbage out, remembering to buy stamps so that Lois can pay the bills, or even rising at 2 A.M. to feed the kid.

Marriage conjures up visions of domesticity, children, installment buying, mortage, etc. — rather mundane complications that are all too familiar to most of us. Better Superman/Clark Kent should have the freedom to swing around the world and the universe. And how nice to relate to the opposite sex without the shackles of marital vows!

So, obviously, this is about sexism. A man who gets shackled by marital vows has to interact with lady stuff like anniversaries and babies, which is demeaning and mundane, and dilutes his power.

For his part, former editor Mort Weisinger heads straight for the sad old maid stereotype, as (not actually) embodied by the Mary Tyler Moore show.

What does the future hold for Lois if we let her follow the Mary Tyler Moore spinster syndrome? Is she doomed to seeing all her girl friends getting married off, eating TV dinners by herself and watching the late show?

Weisinger proposes a separate Mr. and Mrs. Superman comic that presumably would take place on a parallel Earth, but when he talks about the core continuity, he doubles down on the tragic spinster joke:

Those opposed to this concept can continue reading the current group of magazines, where they can enjoy the sight of gradually seeing Lois’ looks fade, wrinkles crevice her face, using spectacles to help her vision and guzzling Geritol to give her vim. They can also look forward to seeing Lois pull out her grey hair when she recalls all the dreamboat suitors she jilted while waiting in vain for that super-bum to propose.

So that’s depressing. But hey, I think Curt Swan might be on to something:

Now, if Superman/Clark Kent appeared on a TV soap opera, there would be no problem! You could dissolve the relationship in any number of ways without incurring the wrath of many “good” people.

I mean, once again, I have no idea what that second sentence means; this topic seems to shake these professional writers to such an extent that they lose control of their syntax.

But the idea that Superman is taking part in a soap opera is actually the correct answer. Superman comics are an example of long-running serialized narrative, and they’ve been most successful when the creators have stopped trying to constantly reset the status quo at the end of every issue, and just let plot points accrue.

Lois and Clark did eventually get married in 1996, and it turns out that the idea of Superman raising a child has been incredibly story-productive. Since the Convergence storyline started in 2015, they’ve generated years of story about Jonathan Kent’s childhood and teenage years, and now — thanks to the magic of soap opera rapid aging syndrome — he’s old enough to star in his own book.

Far from destroying the foundation of the Superman story, giving the characters room to grow actually enriches the franchise, and keeps the story from getting stuck in plot structures and societal attitudes from the 1940s. If this is going to remain a meaningful story, then meaningful things need to happen.

So that’s the uncertain place that Superman II inhabits. The movie isn’t tied to the comic book continuity, and the filmmakers are free to mess with the very precepts, if they want to. The choices that they’re going to make over the next sixty minutes about Superman and Lois’ relationship will have a huge impact on the future of the Superman movies, and the history of superhero movies as a whole. To find out what happens, tune in next week for another thrilling episode!

If you’re curious, here’s how the symposium turned out:

Then the piece ends, “Wouldn’t you know a woman would have the last word on the subject?” which is so depressing that I can’t even deal with it. 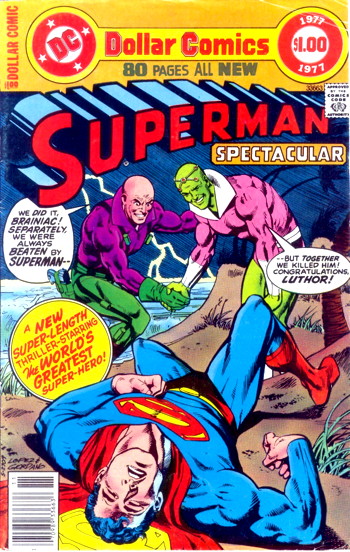