I grant you that life was simpler back then. In 1981, we didn’t have smartphones or streaming television, and the only computer I’d ever been in the same room with was a Commodore PET that could only run programs recorded on a cassette tape.

But even in simpler times, did we really need to be told in the instructions for a board game that you were supposed to “open up the gameboard and place it on a flat surface”?

Now, I had other things that I planned to talk about today — bigger, better, and more important things — but it occurred to me that I hadn’t really investigated the Superman II merchandise so far, so I started making some preliminary investigations into what 1981 had to offer the American child, in the way of brand engagement with the franchise. What I found was this Milton Bradley board game, and it feels to me like this is a story that urgently needs to be told, so here we are.

The box explains that “the epic battle of good vs. evil from the motion picture continues in this thrilling game,” although to be honest there isn’t much of a coherent philosophical subtext. You would imagine that a game promoting “good” would require the players to learn how to cooperate, rather than sabotage each other and steal their cards. Sometimes I think that the Milton Bradley Company didn’t care about our moral development, which is a shame because given the state of the world today, we could have used as much help as we could get.

Once you’ve opened up the game board and located your nearest flat surface, this is what you’re faced with: a race around a track to gain power and defeat your enemies. You start out in the Fortress of Solitude with a pawn, a handful of Power Cards and the use of a single communal die, and your goal is to collect a set of three Villain Cards representing Zod, Ursa and Non, and then head back home to bring them to some kind of unspecified rough justice.

Each player takes the role of a rival Superman, so technically your goal is to defeat all the other Supermen and take control of the Fortress of Solitude, which now that I think about it is actually pretty morally complex. 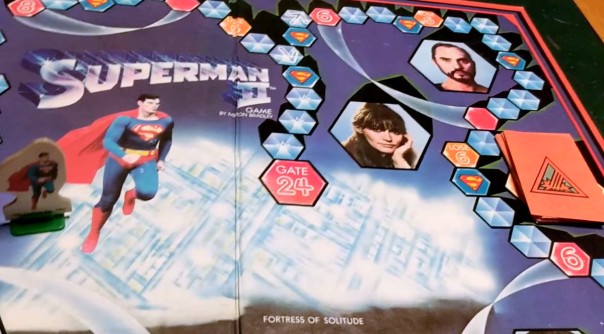 Everybody starts out at Gate 24, a location that does not appear in the movie but is very important to the board game. Everything about the game revolves around the numbers 6, 8 and 10, and when you add those three numbers you get 24, so that’s the explanation for that. 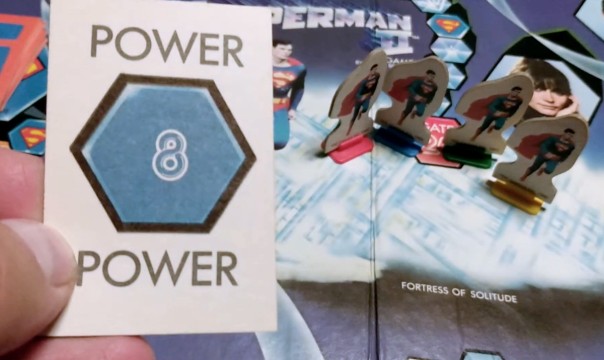 Now, if you’re asking yourself, is he really going to spend this entire post explaining this dumb board game, then the answer is yes, I’m afraid that I am. I’ve gone too far to turn back now. I wish I could say that I’m going to figure out a point to this by the time I get to the end, but life is uncertain.

Anyway, you get three randomly selected Power Cards at the beginning of the game. Each one has a number, and the instructions explain: “The Power Cards are marked with 6, 8 or 10 units of Power. The highest value is 10, then 8, and the lowest is 6.” That feels like another “place it on a flat surface” style note for the mental minorities.

Collecting and deploying these Power Cards is basically the entire game mechanic, so it’s a shame that they look so boring. Everything is hexagon-shaped in this game, because of crystals, so you need to be pretty into hexagons to get a lot of visual enjoyment during gameplay.

You roll the die and move around the track, and you can go either forwards or backwards, which introduces some strategy into the experience. You’re going to try and aim for the spaces with the Superman shield on it, because that’s how you stock up on Power Cards. 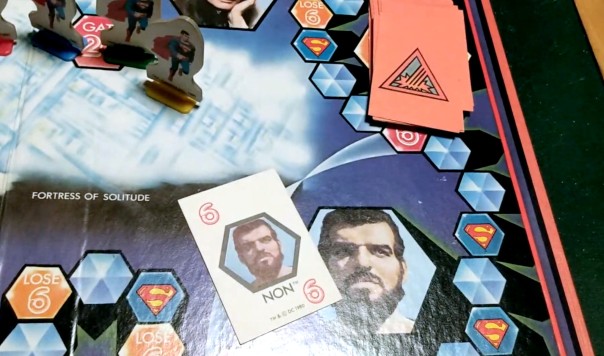 When you get to a red spot with a number on it, you get to challenge the villains, which means you throw down one of your Power Cards and then flip over the first card in the Villain Card pile.

If the number on the Power Card is equal to or greater than the number on the Villain Card, then you get to keep the villain, unless you already have that one, in which case you don’t. To win the game, you need a complete set of Zod, Ursa and Non cards, and you can only keep one of each.

Personally, if I played this game, my house rule would be that you could collect as many Villain Cards as you wanted to, and if you gained a monopoly on one of the villains, then you could do an evil villain laugh, and tell everyone that if they want an Ursa card then they need to kneel before you. There is a vanishingly small chance that I will ever play this game.

There’s also a flight mechanic in the game. Once you’ve challenged a villain on the red numbered spaces, you have the option of using a Power Card to fly from that space to the blank red space that it connects to. I have not yet figured out how that would assist you in the gameplay.

The most fiendish strategic ploy is to challenge another player, and try to steal one of their Villain Cards by using your turn and losing one Power Card, but if they have multiple Villain Cards then they may select one that you don’t need, which won’t benefit anyone. The review of this game on Board Game Geek says that all you need are a few good Power Cards and a lucky roll of the die to make an easy win, but I don’t think they’ve fully considered the “player challenge” aspect of the rules. The more that I think about it, the more complex and devious this game seems to be. The solution to this is probably to stop thinking about it.

By the way, you might have noticed that there’s a picture of Lois Lane on the board, and perhaps you’re wondering what role she plays in the game. The answer is that she is entirely decorative.

Once you’ve collected all three Villain Cards — an emotionally draining task — then you still need to move around the board and get back to Gate 24, which is the entrance to the Fortress of Solitude, while the other players — who up until now, you had always thought of as your friends — try to sabotage you with challenges.

You’ll also need to have Power Cards that add up to 24 or higher to enter the mysterious Gate, which is a whole other ordeal, and then when you get there, you still have to guess the “Mystery Villain” to win.

To do that, you randomly choose between Zod, Ursa and Non, and then flip a card from the Villain Card deck, and if you’ve guessed correctly, then you win. If you’ve guessed incorrectly — and let’s face it, the odds are two-to-one against you, unless you’re counting cards, which will get you in dutch with the pit boss — then you lose a turn and have to try again, while the other ersatz Supermen sail around the board, screaming and cursing at you. This gets more interesting if you put money on the outcome, although you may lose your amateur status.

So I don’t know how anybody ever actually won this game. It seems like it would take hours, especially for the “flat surface” crowd, and the idea that you would spend longer playing a board game based on the movie than it takes to actually watch the movie just feels fundamentally wrong to me. I mean, at a certain point, your mom’s going to want you to come downstairs for dinner.

Tomorrow:
Lois takes matters into her own hands in
2.20: Lois’ Leap