“Scruffy,” sniffs the leader of Earth, alighting at his worst enemy’s palatial polar beach house. “So morbid. A sentimental replica of a planet long since vanished. No style at all.” This, from a guy who’s still in the same outfit he was wearing in Idaho.

Superman leaps out and takes them by surprise, because this was a clever ambush and not just running back to his dad’s place. Then he stands there and waits for the bad guys to make the first move. I swear, these stuck-up Kryptonians may know a lot about early Chinese writing and Joyce Kilmer poetry, but military strategy is not their strong suit. That’s why they’re the only intelligent species in the universe to go extinct because their planet got tired of listening to their bullshit.

Non decides to use his signature move, which is to jump towards Superman with his arms outstretched going rraaagghooarrrrr, and our hero counters with a move of his own: peeling off a strip of his ectoplasmic essence and force-projecting it toward his opponent, who gets quantum-tangled in the coruscating biothermic semi-optical energy wave, rendering him temporarily fibrillated with artron energy and freak weather conditions. Yeah, I have no fucking idea what he does.

This is a brand new superpower that nobody had ever thought of before, and nobody ever will again. I know that any sufficiently advanced technology is indistinguishable from magic, but this is even more indistinguishable from that. It implies that Superman’s costume is… I don’t know, tactical fruit leather? autonomous hypno-vinyl? It doesn’t make sense.

Now, fantasy superpowers are always handwavy expressions of narrative dream logic, but I just can’t muster the energy to mount a defense of this obviously dumb effect.

This is in the script, too; it’s not even one of Richard Lester’s on-the-spot ad-libs, like the hurricane comedy in the Metropolis street fight.

EFFECTS: Quickly, in a dazzling display, Superman puts his hand to his chest. Magically, the “S SHIELD” emblazoned there becomes a literal object in his hand while its “original” remains on the costume. It shimmers and shines with an energy force that clearly connotes immense power.

ON NON — The effect as the “S SHIELD” hits him and wraps around him.

ON ZOD — He looks worried. He is beginning to realize that Superman, on his home turf, has powers and devices at his command beyond their comprehension.

Yeah, mine too. The problem with this gag is that you can’t really fashion a mental model to help you think about it. As silly as it is, flying around the world to make time go backwards actually makes sense on some gut level, because the metaphor is that traveling in time is like traveling in physical space — you just “go” to another place, which happens to be yesterday. But this ecto-shield is “an energy force that connotes immense power”, and like any time that people use the world “energy” in fiction, it doesn’t mean anything.

And then they use finger lasers again, like they did in the Idaho sequence, except that time it was telekinetic and this time it’s just heat vision coming out of their fingers. I’ll actually allow this one, because heat vision doesn’t make a hell of a lot of sense anyway, and the mental model for finger lasers is easy: you point at somebody, and stuff happens. Then Superman takes that stuff, and grimaces, and pushes it back at them using the I’m-rubber-you’re-glue gambit, and they all fall down and act momentarily defeated.

And then we get another new power straight out of the package: teleportation via soundtrack. There’s some eerie musique concréte synthesizer noise, and the villains wink away from existence with a little whoosh, and then return five seconds later with a corresponding whissh, surrounding Superman.

So that’s a thing they can do now: non-instantaneous teleportation, which is ominous but takes longer than it would to just fly over there, because of buffering.

Superman counters by doing one of the weirdest things that he could do besides put a bear trap in his mouth and pretend to be a female Tasmanian Devil: he does the teleportation trick too, but splits himself into four illusory mind-mirror projections, each one operating independently by remote control. This accomplishes hardly anything.

Ursa attempts a tornado roundhouse kick at one iteration of her opponent, but he’s just one of those fragments of underdone potato that you see sometimes around Christmas, no more yielding than a dream.

Non’s version is even stranger, because it crumbles into jade styrofoam shards when he leaps on it. You know, for a guy who leaps as much as he does, Non doesn’t have a very good leap-completion record.

And then Superman looks Lois Lane straight in the eye, and delivers one of the dumbest lines in movie history: “I used to play this game at school. Never was very good at it.”

This is bizarre for the following reasons: a) How is this a game, b) You’re clearly amazing at it, c) Kids on Krypton don’t have superpowers, and — most importantly — d) You didn’t go to school on Krypton, because you left the planet when you were a baby. What the fuck are you talking about?

So the question is, why does this sequence rely entirely on fake superpowers that they just made up?

Well, for starters, the whole point of superhero movies is to show you things that you’ve never seen before, and we’ve just seen all of the regular Superman powers in the 14-minute Metropolis battle sequence that immediately precedes this one. This is maybe why you don’t have two ultimate showdowns between good and evil in a row.

They’ve already done strength, flight, heat vision, super-breath, cold-breath and general stick-to-itiveness, which means they’ve run out of useful powers, and unless they figure out a way to have an ultimate showdown based on listening really hard, there aren’t a lot of other places to go.

The real problem is that basically there’s no way for these people to ever come to any meaningful agreement. They’re all indestructible, which means that they can’t hurt each other, no matter what they do. Superman can absorb all the finger laser power that he wants, and then shoot it right back at the bad guys, but at the end of that shot, nobody is weak or injured, or even tired. Everything that’s happened so far has had no visible effect on any of the characters.

So fighting doesn’t work anymore, and by this point, there’s nothing in the normal box of supertricks that would even be interesting to see again. And now they’ve exhausted their supply of bizarre new powers, and everybody’s still just as strong and healthy as they already were.

To get out of this situation, Superman’s going to have to think laterally, and come up with a way to trick his opponents. Luckily, these three knuckleheads can’t think of anything besides kicking and leaping, so that shouldn’t be too hard.

Tomorrow:
The strange thing they published instead of the novelization
2.48: The Miracle 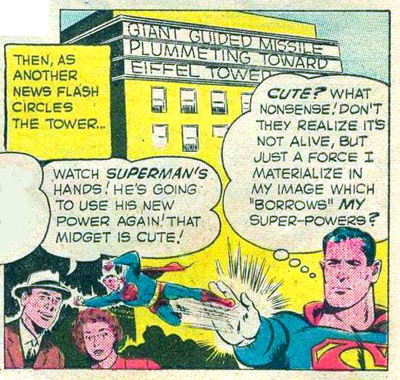 Join 123 other followers
My Tweets