There are a lot of things that Swamp Thing doesn’t say in this movie, and here’s one of them: “Who knows how far up the rot goes in Washington? You’re not safe calling anyone!”

Which is probably for the best. I’ve been having a good time lately, kicking holes in this silly rubber-suit movie, so it’s time for me to put the stick down for a minute, and appreciate a good decision.

As of the last post, we’ve gotten to the scene where Cable returns to Alec’s burned-out science barn, and watches quietly as the enormous Swamp Thing tries to get back to work, tinkering with glass beakers that crumble in his mighty paws. He gives a yell, and Cable scampers, getting away in Jude’s skiff before the monster realizes she was there.

But this scene is very different in the script that I have. If you’re not aware of the bootleg script market, there’s usually one draft per movie that circulates around, getting photocopied and passed on. It’s pretty random which draft ends up getting distributed, and in the case of Swamp Thing, it’s Wes Craven’s third draft.

Now, for the first half of the movie, this draft is pretty close to what ends up in the film, but Craven made some important changes in the second half, starting with this scene.

In the movie, Swamp Thing doesn’t talk for another ten minutes. There’s the big boat fight coming up, and then he’s got a scene with Jude where he just nods, and the boy does all the talking. Then there’s a couple more action scenes where Swamp Thing gets his arm chopped off, and after that, he finally gets a moment to sit and chat with Cable.

Here’s how the lab scene goes in the third draft:

The great beast takes a step towards her — Cable scuttles backwards against a charred wall, her whole body shaking. The beast kneels before her and places the flower in her lap.

As the realization sweeps over her, Cable looks more and more like a person seeing a ghost.

She turns her face from him and begins to cry.

SWAMP THING
Am I so ugly, then?
(shakes his head)
I was going to try to find a mirror, but… 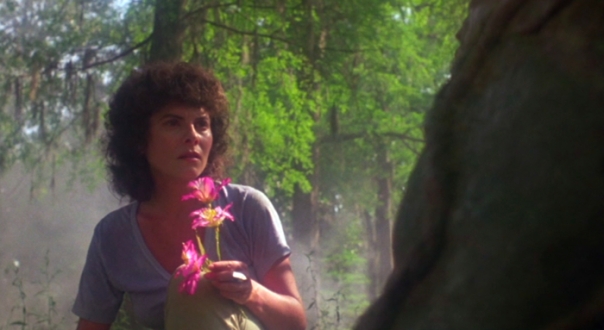 So far, that’s pretty close to what Alec says when he starts talking to Cable in the film. The movie scene starts with Cable regaining consciousness in the monster’s arms, and when she draws back, he offers her an orchid.

Swamp Thing:  Family… orchidaceae. Genus… orchis. Over a hundred species here… much beauty in the swamp… if you only look.

He nods. She takes him in, including his chopped-off arm.

Swamp Thing:  Only… when I laugh…

This halting speech pattern comes from the comics, although back in the 70s, it mostly applied to his thoughts. He hardly talks at all in the first Swamp Thing series, generally sticking to one or two words — “Nooo!” “Stop!” “Who?” “I… care!” There are a number of issues where he doesn’t speak at all for the whole story. Finally, in issue #13, he busts out with a four-word sentence — “I… am… Alec… Holland!” — and then shuts up for almost for a year.

But he makes up for the silence with an extremely chatty interior monologue. “There it is…!” he thinks in issue #9, returning to the science lab. “The story of the Swamp Thing… began in that old converted barn…! All boarded up now… must have taken almost everything… with them when they closed down… but if they left anything behind… anything at all… I’ll have a starting place… to begin the work of… curing my…” and so on.

It’s not particularly clear why he has to pause every few words even in his thoughts, but that’s the style that they developed, and it’s a nice marker to indicate that he’s struggling to remain human, inside all the plant matter.

There was a real question of how Swamp Thing was going to talk in the movie, or if he was going to be able to talk at all. Here’s an excerpt from executive producer Michael E. Uslan’s memoir, The Boy Who Loved Batman:

The big creative decision to be made in approaching the film dealt with the backstory that Swamp Thing had been a scientist, Alec Holland, who transformed into this muck-encrusted mockery of a man. So when he became Swamp Thing, would he still be able to speak?

Some at the studio thought the creature should not talk, but that the “Beauty” to his “Beast” should do all the talking for the both of them. But the other camp firmly believed that Swamp Thing had to speak. At that precise moment, I leaped up from the studio conference table and yelled that one line I had memorized from law school, “Res ipsa loquitur! The Thing speaks for itself!” Who said you can’t use a legal education in the creative side of Hollywood? 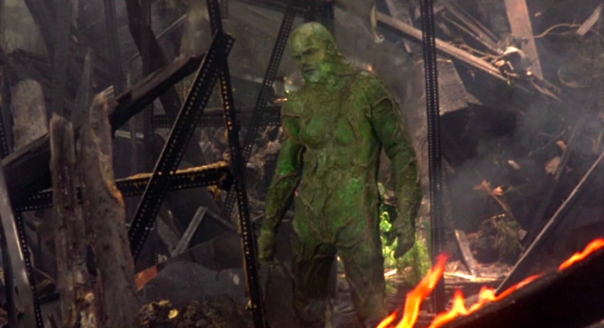 So Swamp Thing speaks in the film, although he uses the halting speech pattern that’s familiar to the comics readers, taking a breath after every few words to indicate that it’s not easy for him to string a sentence together.

But that was very different in the draft script. Here’s how the rest of that Cable/Alec conversation in the wrecked lab goes:

CABLE
But how can he be? I know people
who were working with Ritter in Washington
back when Arcane was running riot in the Balkans.

SWAMP THING
He killed Ritter. Took his identity —
even his appearance — but it was all a disguise.
Perhaps even what I saw wasn’t the real Arcane.

SWAMP THING
Who knows how far the rot goes in Washington.
You’re not safe calling anyone.
Not until I get Arcane.

Cable stares at the creature, alarmed.

CABLE
But you can’t get him.

Shyly, she reaches out and touches the torn holes in his body.

CABLE
Look what he’s done to you already.

SWAMP THING
They’re healing already.
Besides, there’s no choice.
Arcane’s got the notebooks.
If he fabricates the formula…

SWAMP THING
Put the notebook back.
It’s safer here until I get him.

SWAMP THING
Where can I go?
(looks to the barn)
Besides, he’ll never leave us alone.
There’s only one way out. That’s to go through.

Next moment she hears it too, the sharp drone of an outboard motor approaching. Swamp Thing turns and looks out into the swamps.

SWAMP THING
You’ll have to take the notebook now.
He’d find it if we leave it here.
Now, go — I’ll get rid of these.
If it comes to it, destroy this
before you let it fall into his hands.

I don’t know when Craven made the decision to cut back on the conversation, but it definitely works to the movie’s advantage. If there’s one thing that would ruin the mood of the film, it would be treating Swamp Thing as if he was just another motormouth character.

There’s a kind of quiet nobility in his slow, measured speech that makes the half-baked costume a bit easier to take. I’m not usually in favor of slowing things down, but in this case, I think it’s essential.

Running the numbers on Swamp Thing’s comics dialogue: In the first series of 24 issues, he only says 39 words, and there are 12 issues where he doesn’t say anything out loud at all.

This changed a bit when Martin Pasko started the second series, Saga of the Swamp Thing, as a tie-in to the movie. Here’s his spoken dialogue from issue #1 of the 1980s series:

So he’s starting to perk up a bit, but he doesn’t really get into general conversation until Alan Moore takes over the book in issue #20. Moore is a writer’s writer, and he loves long speeches. He went along with a quiet Swamp Thing for his first couple issues, but issue #22 had a lengthy dream sequence where Moore was able to experiment with giving the character real dialogue.

Woodrue… Let me… up… You are… afraid… to fight… as a man fights…
Because… you… are hurting… the green.
Look! Look at… all… this! This… is not… the way… of the wilderness. This… is the way… of man. Your way, Woodrue… The green… did not… do this. You did.
This… is what… you wanted. You are ill… Woodrue… And you poison… the green… with your desires…
You know… I am… not lying. You know… the green… did not conceive… this madness…
And what… will change… the oxygen… back into… the gasses that… we… need… to survive… when the men… and animals… are dead?
He fell… from grace… with the world. He was… uprooted. It’s over.
Yes. I wonder… will your people… do as much?
No. Alec Holland… is dead. He died… many years ago… in an explosion. But it… has taken him… a long time… to lie down. He’s gone now. He’s… at rest…
I? I am… the Swamp Thing.
Yes.
Where I… always go… back… home. Back to… the swamp.

That’s 171 words, in issue #24 — more than four times the word count of the entire two-year original run. And he never looked back.

Join 118 other followers
My Tweets