Martha wakes up, and remembers.

In that first moment just after dawn, her head still clearing from sleep, there’s a fraction of a second when nothing has changed.

She opens her eyes and Jonathan isn’t there, because he couldn’t sleep — worried about the taxes again — and he ended up dozing in the armchair in the living room, a magazine in his lap.

She opens her eyes and Jonathan isn’t there, because his leg is bothering him again, and he went downstairs to do those funny exercises the doctor told him to try.

She opens her eyes and Jonathan isn’t there, because

Because he isn’t there.

There’s work to do. It’s a farm, there’s always work to do, and now there’s even more. She’ll get up, and get dressed, and she’ll make breakfast for Clark — a complete breakfast, the best way to start the day, with two eggs, a slice of buttered toast, a glass of orange juice and the delicious whole-grain oats crunch of General Mills’ Cheerios.

So that’s the tone that we’re going for, I guess, in this moment between Jonathan’s funeral and Clark’s goodbye. Martha’s world is falling to pieces around her — tomorrow, for the first time in her life, she’ll wake up to an empty house — but the really important thing that we need to capture here is the breakfast cereal.

After a brief establishing shot of the farm, we see the view from the kitchen windows. Everything is dark and still, with Martha quietly moving across the screen in silhouette. There’s just one exquisite pinpoint of light, and what are the odds, it’s aimed directly at the spot where Martha happens to put down a box of great-tasting, heart-healthy Cheerios.

Looking through the window, she sees her son, standing alone in the sunrise. He’s leaving, of course; they always knew that he would. God granted them this miraculous child, but they knew, in their hearts, that he wasn’t really theirs. He belonged to the sky, somehow. They were just the people lucky enough to love him, for as long as it lasted.

Oh, and the box of Cheerios is in this shot too, and it must be one of those special imaginary boxes that has the front printed on both sides; what a lucky coincidence for General Mills. This is probably their happiest day since they were promoted from Lieutenant.

There’s another oats-focused shot in the Director’s Cut, too, which adds an extra 33 seconds of Martha calling for Clark, chirruping at the parakeet and waving the cereal box around.

So yeah, it’s another 0-1 game in the age-old tournament of Art vs. Commerce. The Salkinds were sick of paying other people’s money for cranes, trains and dolly shots; they wanted a little money coming in the other direction for once. And who would even notice a bit of subtle product placement, besides every single person who watches the scene?

To be fair, the Cheerios cameo is the only one that stands out; the other sponsors are pretty low in the mix. There’s one where Lois checks her Timex watch when she’s waiting for Superman to arrive, but it’s not particularly noticeable.

And then there’s the JVC sign when people are watching the news through the TV showroom window, which doesn’t really stand out either.

According to the credits, Clark’s wardrobe was also furnished by Barney’s, and Eve’s jewelery by Cartier, not that you’d notice. We’ll have to wait until Superman II to get any more really obvious product placement, especially in the New York street fight where it turns out Superman really, really wants to sell us cigarettes.

But nothing is entirely pure in this fallen world, not even Superman. He was doing product placement all the way back in 1941, in Action Comics #32. The story was about Superman smashing the gambling racket in Metropolis, which is centered on a secret gambling establishment called the Preston Club.

The story itself is pretty pedestrian for a Superman comic. Clark urges the mayor to close down the Preston Club, but when they pay a visit to the notorious den of vice, everyone’s just sitting around reading the newspaper. Lois manages to get in that night, but she’s exposed as a reporter, and Preston drugs her with a special fluid that causes complete amnesia. Superman beats up some thugs and then cures Lois with a shot of mental hypnosis, which is all fairly routine.

But then we end up in Clark’s laboratory, which is a one-time concept as far as I know. He explains to us what he’s been working on: “The Krypto-Raygun — a startling invention with which I can snap pictures — they are developed right in the gun — and can be flashed upon a wall!” And I suppose that could be kind of startling, assuming you’re easily startled.

Next thing you know, he’s clinging onto a wall like Spider-Man with his new toy, gathering up all the evidence he needs, assuming that images that can be flashed upon a wall are admissible in Metropolis. 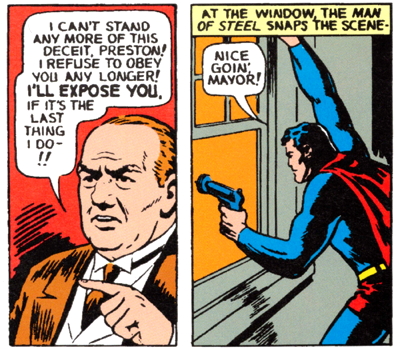 There’s some smash-em-up action at the club, where Superman continues his one-man war on interior design by smashing the door in and wrecking all the furniture. Then he heads to city hall, where he gets a shot of the mayor telling the mobster to go to hell — I’m not sure how that picture helps the case, but maybe Superman has a scrapbook projected on his wall at home.

After a brief spot of hostage-taking and a mountainside car chase, the story ends with the Krypto-Raygun providing the crucial evidence that the police force needs to conclusively settle Preston’s hash, and then we never see it again, except at the department store.

That was all an ad for a toy, obviously, and quite a misleading one, because it suggests that the toy is able to take pictures as well as project them, which it can’t.

It’s pretty sweet, though, especially with the packaging. It was made by Daisy Toys, who had a whole line of different projectors. They came with thin metal film strips that you could feed into the gun, and then you’d project the film on the wall, one frame at a time, to tell a little story. They had sets for other comic strips, including Red Ryder, Big Chief Wahoo from Steve Roper and Mike Nomad, Dan Dunn and Captain Easy, plus sets with Fighting Planes of the World and one that had “Wild Animals, Night Before Christmas, Little Black Sambo”, which is a nice varied assortment.

They went all out on the Superman set, creating a custom art deco design with a raised image of Superman pointing down the barrel of the gun. The box makes up a whole bunch of science words for different parts of the toy, including the Krypto-Ray Filter Tandem, the Krypto-Wave Accumulating Antenna, the Beam Source and Picturizing Chamber, and the Chronology Control and Krypto-Contact Lever.

I honestly don’t know why they even bothered trying to make a story about boring things like gambling and racketeering, when they could have just published this diagram, and kids would have been absolutely entranced by it. Sometimes Commerce deserves the win, and that’s all there is to it. 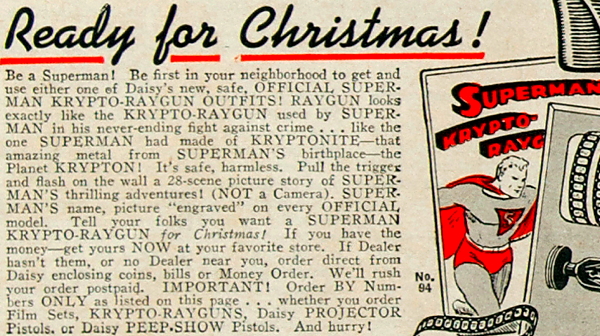 The really startling thing about this invention is that the ad copy invented Kryptonite, two years early.

The ad says: “RAYGUN looks exactly like the KRYPTO-RAYGUN used by SUPERMAN in his never-ending fight against crime… like the one SUPERMAN had made of KRYPTONITE — that amazing metal from SUPERMAN’S birthplace — the Planet KRYPTON!”

As far as I know, that’s the first time the word “Kryptonite” was ever used. The real Kryptonite, the dangerous one, was first introduced on the Adventures of Superman radio show in June 1943, in a story called “The Meteor from Krypton”. It didn’t hit the comic books until 1949.

I assume this is just a case of parallel evolution — a copywriter coming up with a cool-sounding word, like the Krypto-Contact Lever and the Krypto-Beam Generator Housing, and then the radio show writers came up with it independently a couple years later. After all, if the Krypto-Raygun was really made of Kryptonite, Superman wouldn’t have been able to settle Preston’s hash; the hash-settling would have been on the other foot.

There’s an even weirder example of in-comics product placement in the 1978 Superman comics, but I’m going to save that story for another day, when we can sit down and have a good long chat about it. After all, we haven’t even finished breakfast yet, and look at the time. 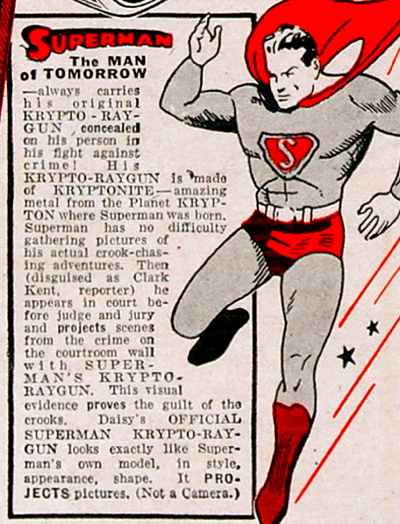