“Watch that cable!” someone cries, like it’s my job to watch cables. “Someone try to pull the lead!” Somebody else shouts, “It’s impossible, it’s red hot!” There doesn’t seem to be a protocol for this kind of situation.

But Superman flies in, and he flips a big switch, which turns everything off and saves everyone. Then he points at somebody and says, “Gentlemen, is that man all right?” And I’m like, what man?

I mean, I don’t even know this guy; I’ve never seen him before, I’m never going to see him again, and with the smoke filter, I’m not even sure that I’m seeing him right now.

You know, I’ve been pretty relentlessly positive about Superman so far, even the Krypton parts, but we have now arrived in the section of the movie that I basically have no use for: the six minutes that follow the missile hitting the San Andreas Fault.

I mean, the first fifty seconds are all right, because it’s Lois in peril, and the movie has spent the last hour training me to believe that Lois Lane is the most important person in the world, which she is.

But then I’m expected to care about a bunch of kids on a school bus going across the Golden Gate Bridge, which I do not,

except for the kid with an enormous afro, who you only see in a couple of shots. If that kid was the featured player in this sequence, then it might have had a chance, but instead what we get is

goats, for some reason? Which

things I give a shit about, alongside

focus on who I’m supposed to care

about, from one moment to the

next. I mean, I get that they’re trying

to show that this is a huge, wide-ranging

crisis, and that Superman is trying to

help as many people as he can, but at this point we’re

a full five minutes into the sequence, and

all of a sudden, there’s a whole housing development that we’re supposed to be concerned about, and what even

happened to those goats? There’s also a moment where

you see the panicking people from the housing development, and someone shouts, “Come on, George! Come on!” like now I’m responsible for keeping track of how George is doing. It just doesn’t work for me at all.

Next, a special weekend post:
1.95b: A Small Amount of the Exciting Original Story of Superman: Last Son of Krypton 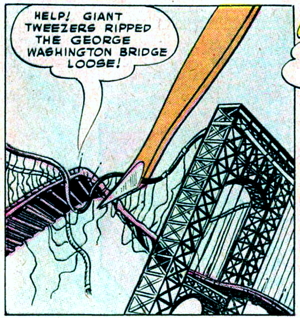