The bar is destroyed, the Jeep is unsalvageable, the meth lab in the barn exploded, and the business district will never be the same. Still, there’s one demographic in East Houston that seems to be pleased with the current trend of events: the chickens.

“I am (cluck cluck) General Zod, your ruler!” says the suzerain. “Yes!” (cluck cluck) “Today begins a new order! Your lands, your possessions, your very lives will gladly be given in tribute to me, General Zod! In return for your obedience, you will enjoy my generous protection. In other words, you will be allowed to live!” (cluck cluck cluck)

That’s got to be the thing that appeals to the poultry voting bloc — the promise that if they’re obedient, they’ll be allowed to live. That’s a better deal than chickens usually get.

And that’s basically it, as far as the public spanking in East Houston is concerned. The Kryptonians have occupied Main Street, and their message to the world is being broadcast on all available channels. The army men are all kneeling in the road, their hands above their heads in surrender. It’s not looking good for our lands, our possessions or our very lives.

The goal for this sequence is to demonstrate how easily the all-powerful Phantom Zone escapees can dominate everyone around them, up to and including the United States Army. They have superstrength, superbreath, telekinesis and heat vision, and most importantly, they can’t be hurt, using human weapons. Also, they’re really mean.

So the progression that the new masters of Earth take in the movie is: subjugate East Houston, terrorize the US Army, vandalize Mount Rushmore, attack the White House, seize control of the world. This turns out to be surprisingly effective, cinematically.

As we discussed earlier this week, the original script had the villains go straight from arrival to a world tour of famous tourist attractions — destroying the Washington Monument, the Eiffel Tower, the Kremlin and the Tokyo skyline — before zeroing in on the White House.

This version that we see in the movie doesn’t have that kind of global scope, but it demonstrates how scary these people would be on an individual level. This isn’t just the destruction of faraway buildings and symbols; this is monsters showing up on your street and targeting you, specifically.

But I think there’s a big, unanswered question here, which is: What do these people actually want?

I mean, at the moment, they want to feel powerful, and they’re getting a lot of satisfaction out of seeing the kneeling soldiers, and screaming in the face of the American military. They want explicit, tangible representations of the inferiority of the human race, and their domination over it. They also take sadistic pleasure in seeing people suffering, and they’re getting a grip on how to cause it.

But what else are they looking for, once they’ve got control?

Human invaders have some kind of goal: they want land, and money, and natural resources, and the comfort and luxury that provides. They want safety from outside threats. They want prosperity for their children, and their people.

But these lunatics don’t have children or people, and they don’t seem to want any. As far as they know, there are only three Kryptonians alive in the universe, and when they discover that there’s a fourth, they try to kill him. Recreating the glory of Krypton is an empty goal, when there aren’t any Kryptonians to live in it.

They don’t even need food, apparently. In the previous scene, when Lois reminds Superman that dinner exists, he suggests that when he’s on his own, it doesn’t occur to him to eat. So these Kryptonians literally have no needs or desires that need satisfying, beyond their taste for praise and suffering. I can imagine them ordering everybody to build statues of them, until they get bored of that, too, and then there’s nothing for them to do.

And we see proof of this sixteen minutes from now, which I think is the scene that actually breaks the movie.

By that point, Zod, Ursa and Non have taken control of the White House, and forced the President to abdicate. And then they’re just sitting around in the Oval Office, playing with executive desk toys, and talking about how bored they are.

“You’re master of all you survey,” says Ursa, and Zod is unimpressed. “So I was yesterday,” he moans. “And the day before.” And then he sighs. The only thing that perks them up is hearing that the son of Jor-El is still around, waiting to be revenged upon. But what will they do, once they’ve taken care of him?

So the domination of these three superjerks ultimately won’t amount to very much. Their utter disdain for anything beyond themselves, and their lack of connection to any homeworld or legacy, means that achieving global domination is an empty prize. We could probably just go about our business, and wait for them to get tired of Earth and move on.

All hail Zod — the prince of no one, the king of nothing! Savior of chickens, and destroyer of Jeeps!

Next:
Fun with the Fantastic Four, part 1! 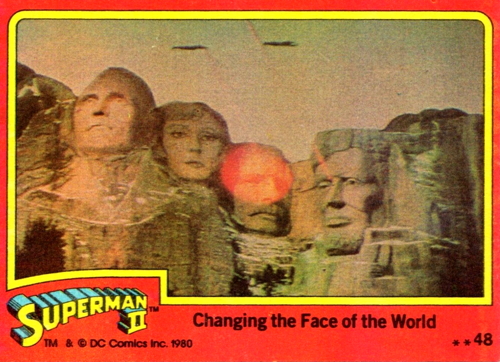