As Alice Cable’s snub-nosed motorboat glides through the swamp towards her next assignment, two nearby water birds squeal and take flight, giving her a mild startle.

“Weird, isn’t it?” says her colleague. “Local fishermen say this place is haunted.” By birds?

Handing her new hostile work environment a desultory glower, Cable misquotes a movie. “I don’t know where we are, Toto,” she mutters, “but it sure isn’t Kansas.”

Her colleague leans forward. “What?”

“Nothing,” she says, and bats at a passing gnat. And that, strangely enough, is another step in Alice Cable’s full-on charm offensive, which takes up the first twelve minutes of the movie. 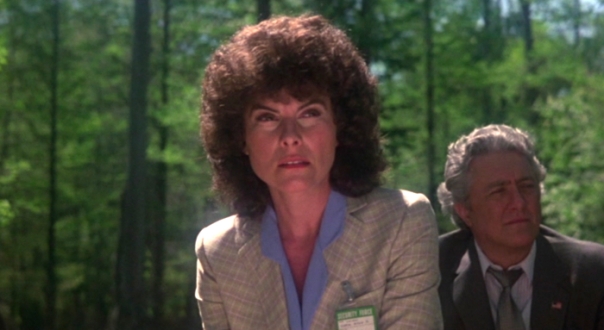 When you’re starting a story, it’s important to get the audience interested in your main characters as soon as you can, and there’s a simple but effective formula: make a friend, make a joke, and make something happen.

Having a friend is crucial, and Cable has one: Charlie, the co-worker from the plane, who makes wry remarks and welcomes Cable to the movie. This is pretty much Charlie’s only role in the film: to demonstrate to the audience that Cable is interesting and worthwhile. She’s so important that he’s bringing her in by helicopter, even though they’re apparently about to shut the project down.

There’s a potential crosswind when the copter lands: a guy going in the other direction, who snarls, “What, they sent a woman out here?” which you’d imagine would lower our esteem. But Cable just rolls her eyes and steps into the boat, which means that she’s heard that crap her whole life, and succeeded anyway. Plus, that guy’s chickening out and leaving the swamp, so his opinion is immaterial.

These are all signals to the audience, which we absorb unconsciously, and they add up to the conviction that the main character is important and likeable. On her part, she doesn’t really give Charlie much. She only says two sentences to him during this opening sequence, both of them jokes, and the second one is the Kansas line, which she retracts. But he continues to cheerfully burble away at her, signaling that we should pay attention to Cable, and not Charlie. 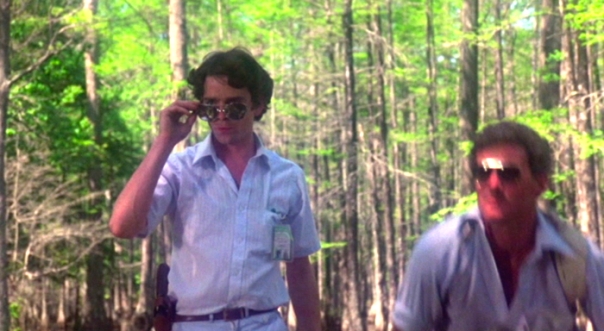 That impression is confirmed when she gets out of the boat, and a young guy ogles her as she walks away. Yeah, it’s another sexist thing, but it continues to inform the audience that Cable is interesting and attractive. 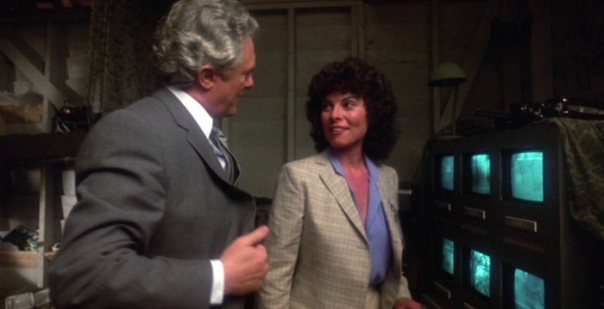 She gets her first actually pleasant moment once they go inside the creepy cabin, and her attention is drawn to a collection of bleeping screens.

“You probably haven’t seen half this stuff,” Charlie mansplains. “It’s all new. Take this, for instance, this is a —”

And she takes up the cue: “A laser-induced subsonic field generator. Gives double readings in the 3200 band, right?” She turns, and gives him a happy smile. “I got a trick for fixing that.”

He’s impressed. “Just my luck, they send me someone who knows what she’s doing, the week they pull us out.”

And there you have it, all the information that we need in order to officially like this character. She’s smart and competent, even with boy stuff like science and machines, and she’s thrilled that her skills will help the project. Charlie admires her, and so do we. Now she’s ready to go and meet the other main character, who has his own five-minute charm routine. 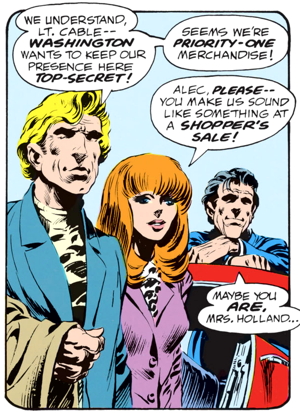 In the comics, Alice was Lt. Matt Cable, a government agent working for an ill-defined intelligence agency. Cable’s the one with the bright idea of setting up Alec and Linda Holland’s top-secret laboratory really far away from civilization, so it can’t be defended properly. He knows that there are bad guys who want access to Alec’s work, and a few of them even show up one night to threaten the Hollands, but Cable isn’t bothered by that — he tells them to lock the door, and everything will be fine.

So the tragedy that kicks off the series is all Cable’s fault, a fact that he does not recognize and blames entirely on other people. 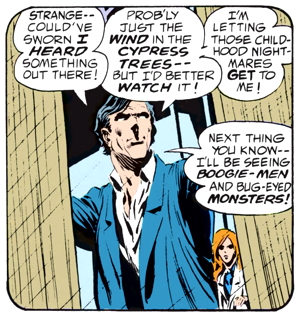 Cable’s not even around when the bad guys blow up the lab, and a flaming Alec runs into the swamp and turns into a monster. But after the funeral, Cable insists on bringing Linda back to the swamp lab to continue her husband’s important work, rather than move all the equipment to someplace safer. Once again: Cable’s fault.

When the bad guys inevitably return to the swamp to kill Linda and steal the Hollands’ work, Cable is hit with a shovel and rendered unconscious, so he’s no help.

Swamp Thing takes it upon himself to kill the guys who blew up his lab and shot his wife, which he does, quite efficiently. And then Cable wakes up, and comes to the obviously incorrect conclusion that this green monster has murdered both Alec and Linda with explosives and a handgun that he clearly doesn’t have.

The monster stomps off into the night, leaving Cable to deal with the dead hoods and their guns, which will make it perfectly clear that the bad guys shot Linda. Cable blames Alec anyway.

Cable promises to hunt the monster to the ends of the earth, which he proceeds to do, on and off for the next 20 issues.

Now, the thing that I find funny about Cable is that he didn’t really know the Hollands, while they were alive. As you can see in the first comics panel I posted above, they call him “Lt. Cable,” and he addresses Linda as “Mrs. Holland.”

But then they die, and all of a sudden they’re close. In issue #3, he refers to “my friends, Alec and Linda Holland,” and by issue #6, he says, “That inhuman monster murdered my best friends!” Cable doesn’t get out much.

Now, people say that Alice Cable in the movie is a cross between Matt Cable and Abby Arcane, who’s the other main supporting character in the series. This is not actually true. 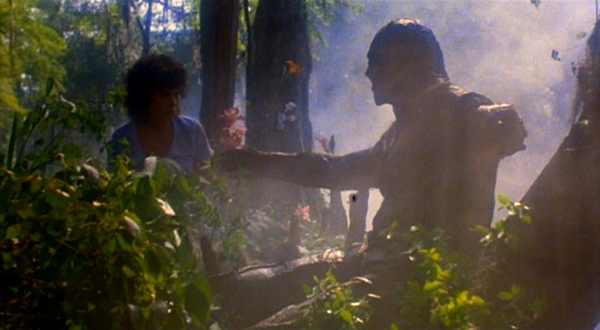 In the first series, Swamp Thing had this intense cat-and-mouse relationship with Cable, but he didn’t really interact much with Abby, who was mostly a talk-to and a peril monkey. By issue #20, Cable and Abby left the series, and Swamp Thing just moved on without them for the final four issues.

The idea that Swamp Thing might be a romantic figure is completely original to the movie. It’s obvious why Wes Craven made the choice to turn Cable female, and make this into a love story — it’s a strong story arc that makes the movie more interesting, and movie studios always think that every film needs to have a love interest.

The movie came out in 1982, and that inspired the creation of the second comics series — but there was no romance. Abby wasn’t even in the book. The Saga of the Swamp Thing had a new and mostly annoying supporting cast, and they didn’t bring Cable and Abby back until issue #16, in 1983. When Alan Moore took over the series, he began to explore a romance between Abby and Swamp Thing starting in issue #25, in June ’84.

That relationship is really important to Moore’s run on the comic, and most of the people who discovered Swamp Thing didn’t read any of the pre-Moore issues, so people think that the Beauty and the Beast story must have been there from the beginning. That’s why they say that the Cable/Swamp Thing relationship in the movie was based on Abby. In reality, that came to the comics two years after the movie.

I don’t know if Alan Moore was inspired by the romance in the Swamp Thing movie — I don’t know if he even saw the movie, and knowing him, it’s possible that he didn’t. But if he was, then that’s one more reason why the 1982 Swamp Thing is a crucial cultural keystone, which nobody went to see.

Lots of things happened to poor Matt Cable, who still appears in DC comics as of last year. Matt realized that Swamp Thing was actually Alec Holland in issue #13 of the first series, and they were friends up until issue #20 (Jan 1976), when Swamp Thing allowed Matt and Abby to think that he’d been destroyed.

When Matt and Abby returned in issues #16 and 17 of the second series (Aug/Sept 1983), they were married, and Matt was broken. It was revealed that the evil Sunderland Corporation had kidnapped Matt and given him damaging electroshock therapy, which turned him into a volatile alcoholic with psychic powers. Then a lot of things happened, and he left the series in issue #31 (Dec 1984).

Matt’s body ended up in a coma on life support, and they revisited him five years later in Swamp Thing #84 (March 1989). In that issue, written by Rick Veitch, Matt meets Dream from The Sandman, who had just been introduced by Neil Gaiman in January, and Dream encourages Matt to let go of his earthly body and become a creature of the Dreaming.

In Sandman #11 (Dec 1989), Neil Gaiman introduced a raven named Matthew. He’s a cute character with a smart mouth, and most Sandman readers have no idea that the raven used to be Matt Cable. Matthew the Raven appeared throughout the original Sandman series, and some of the Sandman spin-offs, most recently The Dreaming: Waking Hours #10 (July 2021). 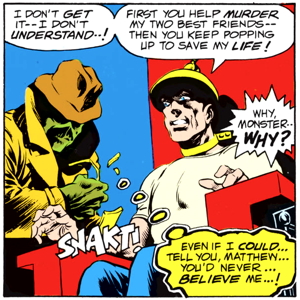