So the first thing that Swamp Thing wants you to know about swamps is that swamps are terrible.

Coptering into the movie on a super shitty afternoon, which communicates to me that they could only afford to rent the helicopter for one day and couldn’t wait for the rain to stop, here comes Ms. Adrienne Barbeau, all dressed up in a suit and a disdainful expression.

She’s flying in from Washington as part of a government operation that’s so secret, they won’t even tell the audience which branch they work for. There’s a scientist around here somewhere, under all the cloud cover, who insists on doing top-secret voodoo science in a rusty old whack shack out on the far edge of the forbidden zone, surrounded by two feet of water as far as the eye can see, and a lot of drippy, decaying junk that apparently we’re supposed to think of as “the environment” these days.

As far as I can tell, the scientist is supposed to stay locked up in the house all the time and recombine DNA or whatever; the one time we see him go outside for a minute, he gets screamed at for breaking protocol. So why does he need to have his lab in the middle of the least convenient location in the continental US? People say that remote work is the new normal but look what happens.

As usual with movie onboarding, people have not given Alice Cable any advance information on her assignment, including where it is, what they’re doing, what her role is supposed to be, who to report to, or whether the Dr. Holland that she’s working with is male, female or, in this case, one of each.

She’s not dressed for the swamps — I’m not sure what the correct dress code is for people in the swamp science industry, but a skirt and heels is not it — and she doesn’t appear to have any luggage, which is fine, because there’s no hotel room to unpack it in.

She’ll be wearing different clothes a few scenes from now, but I have no idea how she manages it; the operation appears to be based out of an abandoned swampside summer camp that’s been steadily succumbing to the elements for decades. This place was born haunted. As far as I can tell, there’s no structure in the entire crumbling complex that even has glass in the windows.

“Holland insisted on building it all out here,” Cable is told upon landing. “He said this is where the life is.” That’s why you don’t allow mad scientists to plan clandestine summer resorts.

Then Charlie tells her, “One of those ‘life forms’ nailed the guy you’re replacing.” This feels like stop-press intel that I would have wanted to know before I got on the helicopter. Cable clearly didn’t get a lot of information during the informational interview.

Meanwhile, elsewhere in the ooze, there’s a group of paramilitary day players skulking in the undergrowth. This is the advance guard for a tribe of barbarous hostiles, intent on overthrowing Dr. Holland’s regime and stealing his treasure.

The leader gestures to his men, and what happens next is an adorable close-order display of unnecessary camouflage, as each member of the group individually pops out of the bushes or from underneath a pile of wet leaves, as the camera tracks across the scene. There’s no particular reason why they need to blend in so badly; nobody’s around to see them. It just makes them feel better, that’s all.

Also meanwhile, on a much sunnier day, a lone agent sloshes around in the swamp somewhere, and if you can’t guess what’s going to happen to him, then I’ll just point out that he’s wearing a red shirt. 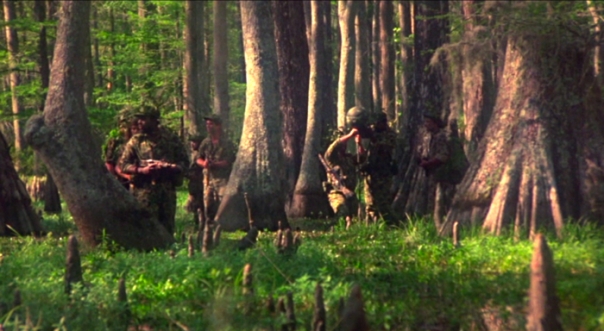 He comes across the Others, who are all breaking protocol and hanging around in clumps as a subset of them do something villainous. You don’t really notice what they’re doing if you’re new to the movie, but if you’ve watched the movie fifteen times and you’re taking screenshots of it for your stupid blog, then you may notice that a few of them are fucking with the Sector 3 sensor array that the good guys have erected on a skinny pole with a metal ball at the top of it.

This is exactly the kind of thing that the agent is watching out for, but it doesn’t seem to make him any happier.

Because then a couple of bad guys splosh in from the sidelines with an even bigger gun, taking him by surprise. I’m not sure how it’s possible to sneak up silently on somebody when you’re all walking around in knee-high water, but maybe this is some kind of swamp ninja mercenary tactic that I’m not aware of.

So the real heartbreak of the scene is that these government people think that they have a security system, with redshirt patrols and sensor arrays and laser-induced subsonic field generators, and it never occurred to them that the enemy could overwhelm their defenses by tiptoeing and having more dudes.

And then there’s one of those great moments in motion picture history that you hear about: the bad guys’ leader reaches into his pocket and takes out a poisonous snake, and the snake bites the agent, and the agent dies. 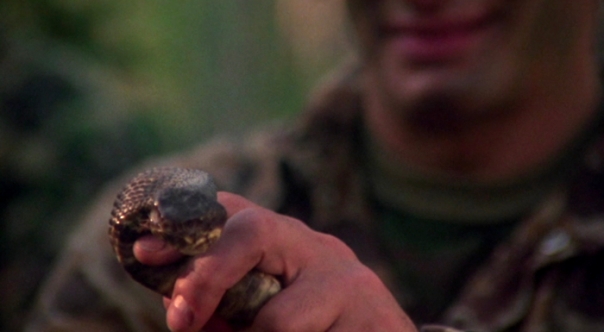 I have a lot of questions about this snake, the primary one being: How do you keep a loose snake in your pocket?

I have other questions, like why do these people carry around so many guns and then kill people with snake bites, but I think the first question is the most pressing.

This appears to be one of those movies where the bad guys are magical serial killers, who are always in exactly the right place at the right time. They get all the breaks. They’ve thought everything out a dozen steps ahead, and the good guys always fall into their traps, no matter how scatterbrained they might be. These guys probably had “Step 4: Kill Guy with Pocket Snake” written down in a notebook.

So the weird thing is that the movie is expecting us to fall in love with the swamp. That’s Cable’s whole character arc: she arrives muttering about not having any good restaurants in the area, and by the end of the film, she’s been awakened to the beauty of this hazardous habitat, where if you don’t get attacked by a wild animal on your own, someone else will go and find one, and shove it at your face.

The swamp is clearly trying to kill these people, one way or another, and it is outrageously successful. Every single character in the movie dies at least once, and none of this would happen if they’d set up their secret lab in a nondescript suburban office park like normal people. This may be the only horror movie ever made where you’re expected to fall in love with the haunted house.

If you want a fun spatial orientation game, watch the sequence where the agent sees the bad guys, and try to figure out how many bad guys there are, and where they’re standing. Everywhere that the guy tries to run, more people keep popping out from behind trees. This operation must be incredibly well funded. 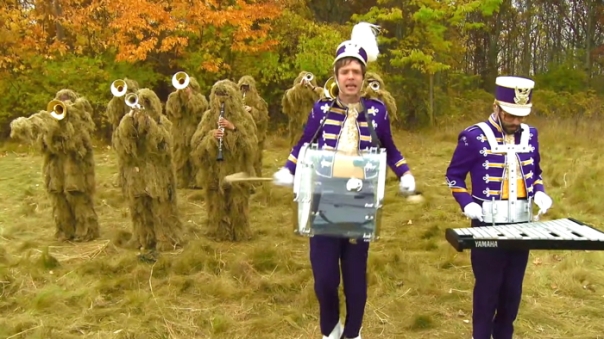