I mean, these days Gus Gorman would probably be the hapless head of a secretly bankrupt crypto exchange, breathlessly spinning imaginary plates and having no idea why people even believe in him.

“You start with a company that builds a box,” he would explain. “And of course, so far, we haven’t exactly given a compelling reason for why there ever would be any proceeds from this box, but I don’t know, you know, maybe there will be, so that’s sort of where you start.

“And now all of a sudden everyone’s like, wow, people just decided to put $200 million in the box. This is a pretty cool box, right? Like, this is a valuable box, as demonstrated by all the money that people have apparently decided should be in the box. And who are we to say that they’re wrong about that? Like, you know, this is, I mean boxes can be great. Look, I love boxes as much as the next guy.”

And there he flies, bold Icarus, flapping his waxen wings en route to the sky, and then the sea. We are strangely vulnerable to know-nothing hucksters, it appears, especially in tech, where people remake the world by typing things. And there’s Gus Gorman, fast-talking his way to illusory riches, and everybody marvels: look at all those pretty red flags, waving in unison.

As Gus Gorman and his fellow techbros know only too well, some are born great, some achieve greatness, and some just kind of randomly have greatness that comes out of nowhere, as a plot device in a story that they probably think they’re the heroes of.

“Hello,” chirps the Webscoe Payroll Division, and who says user interfaces were unfriendly back in 1983? I don’t know how it works at any other multinational, but the Webscoe Industries computer interface is unbelievably eager to please. You just type “Overide all security”, and it goes ahead and overides it for you. Consider it overided, is the instantaneous response.

This is the moment where the movie hacker is supposed to rub their hands and announce, “We’re in!” but it’s 1983 and they haven’t discovered the concept of “in” yet.

Here in the tech space of 1983, almost anything is possible, except a color monitor and a readable font. Master the command line, and the world is yours to command. You can plot two bilateral coordinates at the same time, direct a weather satellite to create bad weather, analyze the composition of an unknown imaginary space mineral, and reconfigure payroll operations, even if you’re not an expert in those fields and you don’t even know how your paycheck works.

In fact, if you can speak computer, then it doesn’t matter whether you know anything at all — the computer knows how, and all you have to do is ask, often in plain English. The first time we see Gus Gorman sitting at his instrument making the numbers dance, the dazzled data school instructor asks him, “How did you do that?” and Gus answers, “I don’t know. I just… did it.” And then he does it again.

There is a tension in Superman III between Gus’ apparent intellectual demeanor and his uncanny abilities at the keyboard. This tension is not resolved in any way, and your reaction to that can color your view of the film considerably.

You can easily imagine the exact same plot structure with a know-it-all whiz kid, some kind of impishly neurodivergent spindly guy with coke-bottle glasses who actually knows what bilateral coordinates are before he starts plotting them. That character would suit this movie all the way down to the ground, reducing things to an easily recognizable cliche that the audience doesn’t have to think very hard about.

But they cast Richard Pryor for this role, and they want some kind of approximation of his stand-up persona. That character, the on-stage “Richard Pryor”, is not a highly educated guy. He’s a street-level striver, a trickster who learned how to stay out of trouble through painful trial and error. He imitates winos and junkies, and talks about sex and money and systematic injustice as experienced by himself and the people he knows. He doesn’t talk about going to college and getting an engineering degree.

So the joke is that they’re taking that guy, and dropping him into the know-it-all whiz kid role with no advance notice. The smart-person stuff pours out of his fingers somehow, while he stands by, just as stunned as everyone else. You could describe Gus as an idiot savant, but he’s more like an apprentice wizard, decreed by destiny to wield great power that he currently can hardly control.

Because that’s how all this computer mumbo-jumbo feels, for the technically un-savvy producers of this film. Computer code is a collection of magic spells, and a facility for making the machines dance could manifest spontaneously, even in deeply unlikely places.

When the audience knows what Gus is trying to accomplish — steal all the half-pennies, or define a target in longitude and latitude — then he talks to the computer in plain English. When he’s doing something that sounds tech-y, like reprogramming a satellite to shoot lasers at the clouds over South America, then he types a series of impenetrable runes and sigils, like *S# A1 E9 PJC { ≠ V 2T2 S 00 {

oh. I just typed that, and now my computer is telling me that I’ve bypassed the firewall, and hacked into the mainframe. Oh, my gosh. We’re in!

The quote at the beginning of this post is scam artist Sam Bankman-Fried, who was heralded as the lead character of cryptocurrency until November 2022, when his company FTX shattered spectacularly and exposed him as the fraud that he obviously always was.

The quote is from an April appearance on Bloomberg’s Odd Lots podcast, where he described “yield farming” in a way that made it unbelievably clear that his business was a Ponzi scheme based entirely on hype. This was seven months before the collapse, and apparently nobody realized that it was a confession, except for me and everyone else on Reddit. Here’s a transcript of the interesting part. 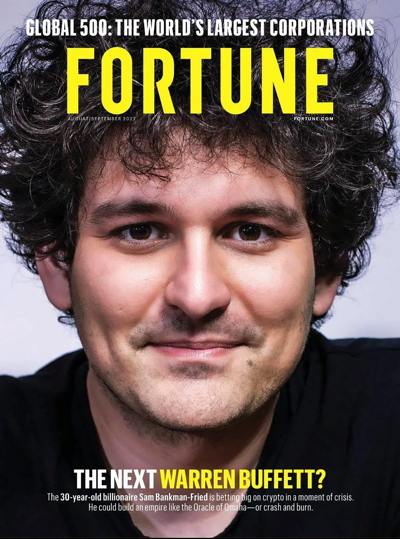