And then, after a goofy boat fight, a knee to the groin and a thrill kill, Swamp Thing does something unexpected: a good scene.

I mean, it’s not a great scene. It’s still a not-very-convincing rubber monster suit with a bite taken out of it. The scene is full of extremely assertive stage mist which blows in both directions, depending on who you’re looking at. The dialogue builds to the line “Everything’s a dream when you’re alone,” which doesn’t make sense and isn’t true.

But they quiet down and stop doing stunts, and they give the two lead characters a minute to do some acting, and they get the lighting right, for once. Most importantly, they don’t overdo it.

This is a love scene, kind of, in the sense that these characters could have had a romantic storyline if tragedy hadn’t intervened. But it’s more about grief than anything else, a recognition that a terrible thing has happened that they can’t undo.

There are a lot of ways to play this moment, and the most straightforward would be for him to say “Hey, it’s me, I’m Alec,” and then they start talking about Arcane and the formula. Instead, he gives her a clue — quoting himself from earlier in the film — and then lets her process that at her own pace. This isn’t a moment that they need to rush, and it’s more satisfying to watch the realization happen a little at a time. 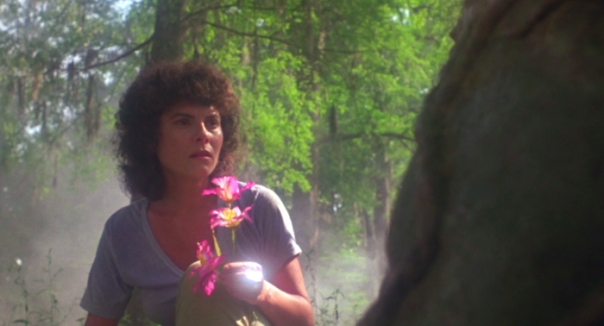 This gives them the opportunity to focus on the film’s one real asset, which is Adrienne Barbeau doing interesting things. We are moments away from the film squandering that asset with a topless bathing scene and then pushing her to the sidelines, but right now, for a very limited time, the movie is actually about how Cable feels, and how she reacts to life-changing events. Everything else stops in place, while Cable has some productive character development.

There are a lot of directions that an actress could go in this scene, many of them silly and embarrassing. Barbeau goes primarily with grief. Here’s the man that she thought was dead, but she’s not celebrating his survival. She doesn’t really understand what’s happened, but she accepts it, which I think speaks to the character’s intelligence and integrity. 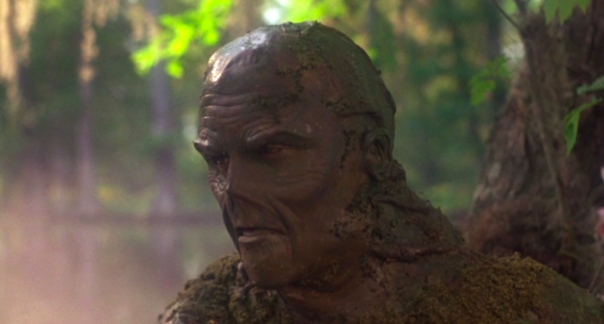 And they really do get the lighting right, which in this movie is a miracle. He’s primarily in shadow, which reflects his situation and helps to obscure the fact that he’s covered unevenly in model train set foliage. She’s primarily in the light, because she’s still part of the human world, and Craven wants us to actually see her facial expressions, which has not always been the case.

The thing that works in the scene is the carefully-judged physical intimacy between the characters. She doesn’t kiss him, which is critical. Watching her put her lips on the creature would be off-putting — not because he’s a plant monster, but because he’s so obviously a guy in a rubber suit; the audience would be thinking about the latex face appliances rather than the emotional content of the scene.

Instead, he puts his hand on the side of her head to console her. Then she touches his face, to help her accept the reality of the situation, and to show that she’s not afraid of him. It’s intimate, but not directly romantic or sexual.

The scene ends with her burying her face in his chest and crying, which is the correct response. We’ve seen her almost exclusively expressing strength and resilience so far — this is the character who kicked her captor in the crotch and swam away, a few minutes ago — but this is a moment when she needs to be consoled.

Like I said, it’s not an award-winning scene that spoke to the depths of the American moviegoing public. But when you think about all the ways that this could have gone wrong — and, in fact, will start going wrong immediately afterwards — it’s nice to have a moment that allows Cable to have some human feelings. Okay, moment over.